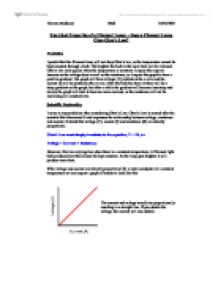 I predict that the filament lamp will not obey Ohm’s law, as the temperature cannot be kept constant through a bulb. The brighter the bulb is the more heat will be released. Ohm’s law only applies when the temperature is constant. I expect the amps to increase as the voltage does as well as the resistance, so I expect the graph to have a positive gradient. The graph will have voltage (V) plotted on the x-axis and the current (I) will be plotted on the y-axis. After the bulb has been lit there will be a steep gradient on the graph, but after a while the gradient will become less steep and slowly the graph will start to become more cureved, as the resistance will not be increasing at a constant rate.

I came to my prediction after considering Ohm’s Law. Ohm’s Law is named after the scientist that discovered it and expresses the relationship between voltage, resistance and current. It stated that voltage (V), current (I) and resistance (R) are directly proportional.

Ohm's Law most simply translates to the equation, V = IR, or:

I am going to change the resistance and monitor the voltage and current. I am going to use the voltage as a basis for the experiment and for every 1volt increase I will record the current reading. The voltage will be controlled by a variable resistor.

I set up the equiptment for the experiment that I am going to do. I used the variable resistor to find the minimum and maximum voltage that I could record. The maximum voltage was 10.8V and the minimum was 1.8V. This information is important because it means I can draw up the basis for my table of results. I have decided to take ten values, one record every 1 volt. I feel that this number of results will enable me to draw an accurate conclusion. 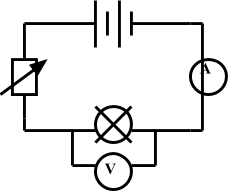 - I will connect up the ammeter, the variable resistor, the filament lamp and the voltmeter with wires.

My results were of good quality and have produced a good conclusion. The graph showed no anomalies and produced a smooth curve. I did the experiment three times so I could find the average result. This reduces the risk of any slight anomalies really affecting the final results.

To refine my method I could have let the lamp cool down for a longer period of time to ensure each experiment was the same. I could have done more experiments to get a more accurate average. I could refine my results by taking more readings of the voltage and current. I could have measured the results in Millie-amps to get an accurate result.

I think my results are sufficiently accurate because I have similar results with other members of my class. I did repeat the experiment three times to make sure it was accurate. My research agreed with my findings. I also have enough results to draw an accurate conclusion.

“There are conductors in which the current that flows is not proportional to the applied voltage. These do not follow this law and are called nonohmic conductors.”

Columbia Encyclopaedia, Sixth Edition. This quote says that the filament lamp is a nonohmic conductor because it does not follow Ohm’s law.