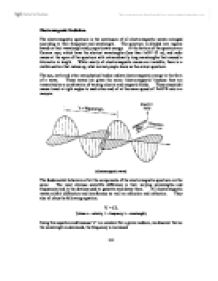 The sun, earth and other astrophysical bodies radiate electromagnetic energy in the form of a wave.    These waves are given the name ‘electromagnetic’ because they are transmitted as a combination of varying electric and magnetic fields.      These sinusoidal waves travel at right angles to each other and all at the same speed of  3x10^8 m/s in a vacuum. 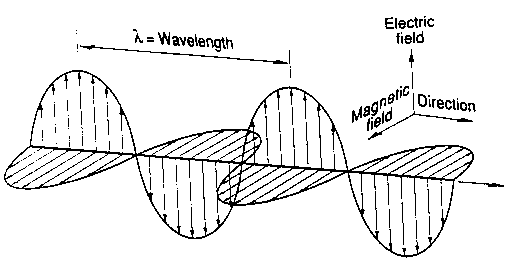 The fundamental behaviors of all the components of the electromagnetic spectrum are the same.   The most obvious scientific difference is their varying wavelengths and frequencies and in the devices used to generate and detect them.

The 20th century saw the beginning of the Theory of Quantum Physics.  Up until this time electromagnetic radiation was considered purely as waves that shared many characteristics with light.   However, when it was seen that electricity could be produced by light striking a metal, Albert Einstein hypothesized that radiation exhibited the characteristics and nature of a particle.   Einstein suggested that light behaves like concentrated packets of energy which he called ‘light quanta’ (now referred to as photons).  Scientists believed that these packets of energy could be transmitted by the translation of particles that have momentum and that the particles did not interact with each other because of their extremely small size and high speeds.    The discovery of this ‘particle’ theory set in motion the evolution of Quantum physics and the photoelectric effect.

The 'particle theory,' was successful when considering only some of the optical phenomena and excluding the demand for precise and quantitative agreement between predictions and results.     The model can account for the interaction of light.     Its properties explain both specular and diffuse reflection, as well as Snell's law of refraction.

This was confirmed by experiments performed by Clinton Davisson, Lester Germer and George Thomson in 1927.    Davisson and Germer directed a beam of electrons onto a crystal of nickel and observed behaviour similar to when x-rays are diffracted by a crystal.    The wavelength of the diffracted electrons matched that expected by de Broglie’s hypothesis.           In 1925 Erwin Schrodinger put forward an equation which can be viewed as a form of the wave equation applied to matter waves, and Einstein derived two formulae to calculate the frequency and energy of a photon:

The research of these brilliant scientists helps us to comprehend the extraordinary structure, behavior and history behind the discovery of electromagnetic radiation.    Their relentless investigation has paved the way for future investigation and discoveries in this complex field of science.