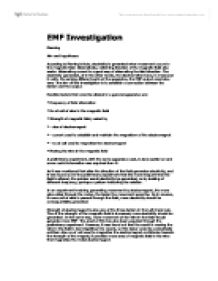 According to Fleming's Rule, electricity is generated when movement occurs in the magnetic field. Alternatively, switching direction of the magnetic field also works. Alternating current is a good way of alternating the field direction. The electricity generated, of in the other words, the electromotive force, is measured in volts. By varying different parts of the apparatus, the EMF output could also vary. The aim of this investigation is to establish a connection between the factors and the output.

Possible factors that could be altered in a general apparatus are:

* No of coil of wire in the magnetic field

* Strength of magnetic field, varied by

* - current used to establish and maintain the magnetism of the electromagnet

* - no of coil used to magnetize the electromagnet

* Moving the wire in the magnetic field

A preliminary experiment, with the same apparatus used, is done earlier on and some useful information was acquired from it.

As it was mentioned that alter the direction of the field generates electricity, and it was found out in the preliminary experiment that the more frequent that the field is altered, the quicker would electricity be generated, so by looking at different frequency, perhaps a pattern indicating the relation.

In an experiment involving generating movement by electromagnet, the more wire coiled through the motor, the faster the movement would be.

And as the current is increased through the unmagnetized-magnet, more electricity is generated. This is because the electric domains inside the magnet become magnetized. This is not a cumulative effect, so more energy is needed to magnetize more domains. The more domains magnetized, the stronger the electromagnet will become.

After a study, it has been revealed that the circuit used contains so many built-in errors that cannot be helped. These factors are:

* Eddie current inside the magnet itself;

* Flux being lost on the corners of the magnet; and

* Resistance of the wire.

This is the only valid explanation for the difference from the obtained results and the calculated results. The formula is accurate given that the efficiency of the circuit is 100%, but in this case, it is not.

Nevertheless, all that were predicted happened in the experiment. Some gives unprecedented results, but they all turn out with patterns within them. They seem to be accurate to a certain extent, as they all fit in their own patterns, despite the peculiar turnout of the frequency graph.