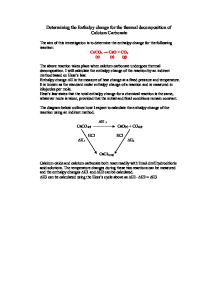 or limitations of the equipment used. Probably the biggest measurement error that occurred in the experiment was with regards to the temperature change that take place during a reaction. This was because it was virtually impossible to get a more reliable answer than that to the nearest whole number. It would have been very unlikely that the true values of the temperatures to be a whole value therefore this would have caused error in my result. To solve this problem I could have used a different type of thermometer, such as a digital thermometer that gives a reading which is more accurate than that to the nearest whole number. Another measurement error that could have taken place was when measuring the masses of my substances. I only measured the masses of the substance to one decimal place, which wasn't very accurate to give me a more reliable result I should have measured masses up to more significant figures. To make the experiment more accurate I could have repeated the investigation more times, from the results of each separate experiment I could then have been able to calculate an average of my enthalpy changes. Overall I feel I that the experiment went relatively well as I have done some research and found that other people have come to the same conclusion as me, which is that the thermal decomposition of calcium carbonate is an endothermic reaction. ...read more.