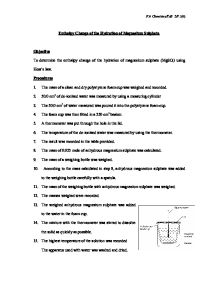 Enthalpy Change of the Hydration of Magnesium Sulphate

This method takes a long time. As mentioned above, the longer the time of reaction, the larger the heat loss. So, in this method of preparation involved a large amount of heat loss and the results would be extremely unreliable; the solution would maintain a more or less the same temperature throughout the whole experiment as the heat tranfer in a very long time.At the same time, the condition of experiment is also difficult to control.Eventually, it will be extremely difficult ,if not impossible,to measure the exact temperature change in the reaction. Furthermore,the nature of a crystallization process is governed by both thermodynamic and kinetic factors, which can make it highly variable and difficult to control. Factors such as impurity level can also make the temperature change measured in the process inaccurate. Moreover,crystallization usually occurs at a lower temperatures. This can only mean that a crystal is more easily destroyed than it is formed. Similarly, it is usually much easier to dissolve a perfect crystal in a solvent than to grow again a good crystal from the resulting solution. Therefore,normally, the enthalpy change of the hydration of magnesium sulphate will not be measured directly. * Conclusion The enthalpy change of the hydration of magnesium sulphate (MgSO4) founded in the experiment is -55.1kJmol-1. * Reference http://www.wonderhowto.com/how-to-determine-enthalpy-hydration-mgso4-284169/ http://wiki.answers.com/Q/Why_the_enthalpy_change_of_hydration_of_anhydrous_magnesium_sulphate_cannot_be_measured_directly http://www.studyzones.com/questionzone/answer/49437x1149/Enthalpy-change-of-MgSO4 http://www.righthealth.com/topic/Magnesium_Sulphate?p=l&as=goog&ac=404 http://www.instructables.com/id/Determine-the-Enthalpy-change-in-hydration-of-Anhy/ http://www.chemicalforums.com/index.php?topic=5730.0 F.6 Chemistry Notes Section III by Ms Sin W L THE END ?? ?? ?? ?? F.6 Chemistry/TAS 5/P.1(6) 1 ...read more.