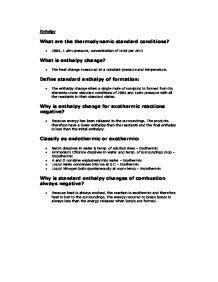 Enthalpy - What are the thermodynamic standard conditions?

Enthalpy What are the thermodynamic standard conditions? * 298K, 1 atm pressure, concentration of 1mol per dm3 What is enthalpy change? * The heat change measured at a constant pressure and temperature. Define standard enthalpy of formation: * The enthalpy change when a single mole of compund is formed from its elements under standard conditions of 298K and 1atm pressure with all the reactants in their standard states. Why is enthalpy change for exothermic reactions negative? * Because energy has been released to the surroundings. The products therefore have a lower enthalpy than the reactants and the final enthalpy is less than the initial enthalpy. Classify as endothermic or exothermic: * NaOH dissolves in water & temp. ...read more.