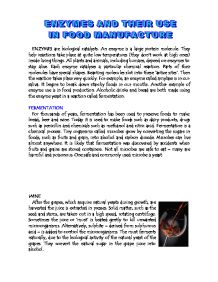 Enzymes and their Uses.

ENZYMES are biological catalysts. An enzyme is a large protein molecule. They help reactions take place at quite low temperatures (they don't work at high ones) inside living things. All plants and animals, including humans, depend on enzymes to stay alive. Each enzyme catalyses a particular chemical reaction. Parts of their molecules have special shapes. Reacting molecules slot into these 'active sites'. Then the reaction takes place very quickly. For example, an enzyme called amylase is in our saliva. It begins to break down starchy foods in our mouths. Another example of enzyme use is in food production. Alcoholic drinks and bread are both made using the enzyme yeast in a reaction called fermentation. FERMENTATION For thousands of years, fermentation has been used to preserve foods to make bread, beer and wine. Today it is used to make foods such as dairy products, drugs such as penicillin and chemicals such as methanol and citric acid. Fermentation is a chemical process. ...read more.

Most modern breweries buy prepared malt. They soak it in warm water, in what is called the 'mashing' process, and then extract liquid, which is called wort. The liquid wort is boiled with hops that give the characteristic flavour of beer. It is then cooled and selected strains of yeast are added. Like most plants, yeast grows faster at warm temperatures. Lower temperatures of 10-15 C are used for lager, with a fermentation time of 8 to 10 days. Lager yeast requires a cooler temperature in which to grow. At the end of fermentation, the beer is filtered or spun in a cylinder called a centrifuge, which removes the yeast cells. It may be pasteurised by heating to give it a longer life, and is often casked, bottled or canned and aged before being drunk. Beer contains 85 to 93% of water. It may also contain a small percentage of sugar, between 2 and 10% alcohol, and some minerals and b vitamins. ...read more.

The curds are shaped into moulds and stored on cool shelves and left to ripen into cheese. YOGHURT Adding certain bacteria (lactobacilli) to milk and allowing this to ferment without oxygen makes yoghurt. The bacteria multiply and cause the milk to thicken. They reduce the sugar content by converting the milk to sugar, lactose, into lactic acid (similar to cheese production). This is why natural yoghurt tastes sour. OTHER FOODS Enzymes are also used in the production of many other foods. In meat, they are used to make it tender. In confectionery enzymes are used to break down starch syrup into glucose syrup (carbohydrases are used) or change glucose into fructose which is sweeter so less is needed and is used in slimming foods (insomerase) or break down sucrose into glucose and fructose or lastly, to make artificial sweeteners. Enzymes are also useful in baby food as they start off the digestion process of proteases and lipases. Enzymes also have other uses including medical treatments for cancer and penicillin as well as biological washing powders. These breakdown stains (proteases attack proteins and lipases attack fats) and also to soften fabrics (cellulases break down the 'bobbly' bit that can form. ...read more.