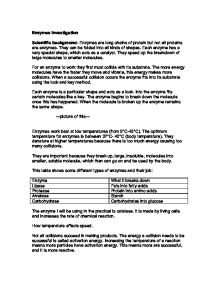 Enzymes Investigation Scientific background- Enzymes are long chains of protein but not all proteins are enzymes. They can be folded into all kinds of shapes. Each enzyme has a very special shape, which acts as a catalyst. They speed up the breakdown of large molecules to smaller molecules. For an enzyme to work they first must collide with its substrate. The more energy molecules have the faster they move and vibrate, this energy makes more collisions. When a successful collision occurs the enzyme fits into its substrate using the lock and key method. Each enzyme is a particular shape and acts as a lock. Into the enzyme fits certain molecules like a key. The enzyme begins to break down the molecule once this has happened. When the molecule is broken up the enzyme remains the same shape. ...read more.