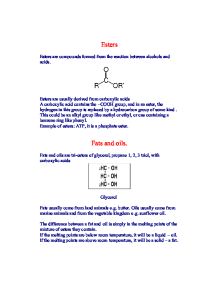 Esters Esters are compounds formed from the reaction between alcohols and acids. Esters are usually derived from carboxylic acids A carboxylic acid contains the -COOH group, and in an ester, the hydrogen in this group is replaced by a hydrocarbon group of some kind. This could be an alkyl group like methyl or ethyl, or one containing a benzene ring like phenyl. Example of esters: ATP, it is a phosphate ester. Fats and oils. Fats and oils are tri-esters of glycerol, propane 1, 2, 3 triol, with carboxylic acids Glycerol Fats usually come from land animals e.g. butter. Oils usually come from marine animals and from the vegetable kingdom e.g. sunflower oil. The difference between a fat and oil is simply in the melting points of the mixture of esters they contain. If the melting points are below room temperature, it will be a liquid - oil. If the melting points are above room temperature, it will be a solid - a fat. The lower melting temperature oils tend to replace fats in marine animals e.g. ...read more.

Saturated fat The hydrocarbon chains are, of course in constant motion in the liquid, but it is possible for them to lie tidily when the substance solidifies. If the chains in one molecule can lie tidily, that means that neighboring molecules can get close. This increases the attractions between one molecule and its neighbors and so increases the melting point. The problem of packing of molecules in unsaturated fats which makes them have a low malting temperature There isn't any rotation about a carbon - carbon double bond and so that locks a permanent kink into the chain. That makes packing molecules close together more difficult. If they don't pack so well, the wander Waals forces won't work as well. This effect is much worse for molecules where the hydrocarbon chains either end where the hydrocarbon chains are arranged Cis to each other, which means, both of them on the same side of the double bond. In Trans form, the two hydrocarbon groups are on opposite sides of the carbon - carbon double bond. ...read more.

Lubricating oils and essential oils Lubricating oils are based on the products of vacuum distillation of the higher boiling fractions from petroleum. They are not esters. Essential oils strongly smell and volatile oils derived from plants. * They are derived from the molecule C10H16, limonene, which is an essential oil derived from lemon grass * They are called terpenes due to their relationship with limonene. * They can be aldehydes, alcohols, or ketones. * Most of them are now synthetic. You should realize that the volatility and odor of alcohols can be varied by esterification often with ethanoic acid Soaps Saponification: making of soaps by the alkaline hydrolysis of fats and oils the alkali usually used is sodium hydroxide. Other alkali's like: * Potassium hydroxide: is used in making toilet soaps * Lithium hydroxide: is not suitable * Other lithium salts: are used in greases for automobiles. 1- The soap is precipitated from the mixture by saturating the solution with common salt. 2- After washing out excess alkali, crude soap is mixed with glycerol to soften it 3- It is then colored and perfumed. Thank you :) ...read more.