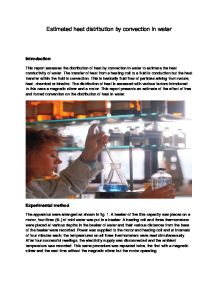 Estimated heat distribution by convection in water Introduction This report assesses the distribution of heat by convection in water to estimate the heat conductivity of water. The transfer of heat from a heating coil to a fluid is conduction but the heat transfer within the fluid is convection. This is basically fluid flow of particles arising from nature, heat, chemical or kinetics. The distribution of heat is assessed with various factors introduced. In this case a magnetic stirrer and a motor. This report presents an estimate of the effect of free and forced convention on the distribution of heat in water. Experimental method The apparatus were arranged as shown in fig. 1. A beaker of five litre capacity was places on a motor, four litres (4L) of cold water was put in a beaker. A heating coil and three thermometers were placed at various depths in the beaker of water and their various distances from the base of the beaker were recorded. ...read more.

This can be confirmed by the comparison of the energy input calculated based on experimental values with the energy input calculated based on the theoretical values. Readings to support this is shown in Table 3 and fig 3. A poor distribution of heat occurred in the first experiment where the water was heated freely. This is represented in Table 2 and figure 2 and by comparison of the experimental and theoretical values of the energy inputs. In experiment 3 where only the motor was used the graph 3 and figure 4 shows a better distribution of heat compared to experiment 1. Conclusion In a freely heated body of water, higher temperatures are taken from closer to the surface and lower temperatures towards the bottom. With introduction of kinetic energy from the stirrer and motor, the velocity of fluid flow increased thereby increasing the rate of heat transfer and the even distribution of heat through the water. This shows that water is a poor conductor of heat energy if heated with free convection. ?? ?? ?? ?? ...read more.