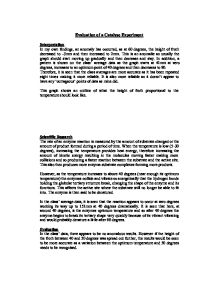 Evaluation of a Catalyse Experiment.

Evaluation of a Catalyse Experiment Interpretation In my own findings, an anomaly has occurred, as at 60 degrees, the height of froth decreased to -3mm and then increased to 2mm. This is an anomalie as usually the graph should start moving up gradually and then decrease and stay. In addition, a pattern is shown on the class' average data as the graph starts at 41mm at zero degrees, increases to an optimum point of 40 degrees and then decreases to 80. Therefore, it is seen that the class averages are more accurate as it has been repeated eight times making it more reliable. It is also more reliable as it doesn't appear to have any 'outrageous' points of data as mine did. ...read more.

This affects the active site where the substrate will no longer be able to fit into. The enzyme is then said to be denatured. In the class' average data, it is seen that the reaction appears to occur at zero degrees working its way up to 151mm at 40 degrees dramatically. It is seen that here, at around 40 degrees, is the enzymes optimum temperature and so after 40 degrees the enzyme begins to break its tertiary shape very quickly because of its vibrant vibrating and would probably denature a little after 80 degrees. Evaluation In the class' data, there appears to be no anomalous results. However if the height of the froth between 40 and 50 degrees was spread out further, the results would be seen to be more accurate as a variation between the optimum temperature and 50 degrees needs to be recognised. ...read more.

Was the water-bath actually 4 degrees? * There may be problems with timing one minute. Stopwatches may differ from group to group or some groups may have gone beyond or stopped the time too early. Limitations The first limitation that is easily recognisable is that the numbers of temperature readings are not enough. More experiments using several more temperatures need to be carried out in order for the results and the curve on the graph to be more clear and accurate and for a proper understanding of the experiment. Secondly, as a group, the experiments should have been repeated at least four times, as not all groups had carried out the task well, so repetition could verify the results. As a result, both limitations could lead to the failure of the whole experiment as not getting the sufficient amount of data required, limits the data and results and the understanding of enzyme reactions. ...read more.