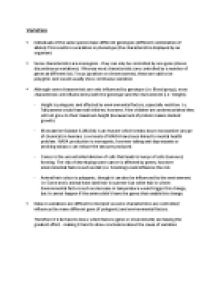 ﻿Variation * Individuals of the same species have different genotypes (different combination of alleles) This results in a variation in phonotype (the characteristics displayed by an organism) * Some characteristics are monogenic - they can only be controlled by one gene (shows discontinuous variations). Whereas most characteristics are controlled by a number of genes at different loci / locus (position on chromosomes), these are said to be polygenic and would usually show continuous variation. * Although some characteristic are only influenced by genotype (i.e. Blood group), most characteristic are influenced by both the genotype and the environment (i.e. Weight). * Height is polygenic and affected by environmental factors, especially nutrition. I.e. Tall parents would have tall children, however, f the children are undernourished they will not grow to their maximum height (because lack of protein means stunted growth) * Monoamine Oxidase A (MAOA) is an enzyme which breaks down monoamine (a type of chemical) in humans. Low levels of MAOA have been linked to mental health problem. NAOA production is monogenic, however taking anti depressants or smoking tobacco can reduce the amount produced. * Cancer is the uncontrolled division of cells that leads to lumps of cells (tumours) forming. The risk of developing some cancer is affected by genes; however environmental factors such as diet (i.e. Smoking) could influence the risk. * Animal hair colour is polygenic, though it can also be influenced by the environment. I.e. Some arctic animal have dark hair in summer but white hair in winter. Environmental factors such as decrease in temperature would trigger this change, but it cannot happen if the anima didn?t have the genes that enable this change. * Data on variations are difficult to interpret as some characteristics are controlled/ influenced by many different gene (if polygenic) and environmental factors. Therefore it?d be hard to know which factors (gene or environment) are having the greatest effect - making it hard to draw conclusions about the cause of variation. ...read more.

Starch, cellulose and Fibres * Cellulose consists of beta glucose that are alternatively inversed and 1,4 glycosidic bond forms between the molecule through condensation. These forms straight, unbranched chains of cellulose and each chain are stacked together to from hydrogen bonds between them ? forming microfibrils. The strong threads means cellulose provides structural support for cells. * Plant fibres are made up of long tubes of plant cells, for example Sclerenchyma fibres consist of tubes of dead cells ? they?re strong so are useful for rope/fabrics. * Cell wall contains cellulose microfibrils in a net like arrangement; this structure and the strength of microfibrils make plant fibres very strong. * Primary cell walls have lots of cellulose, so it provides lots of structural support, and it also contains some pectin. Hemicelluloses are also present which attaches and connects microfibrils. The primary cell wall and middle lamella are present to allow flexibility for cell growth. Secondary cell wall develops when a cell is older ? when it?s done growing. Secondary cell wall contains lots of lignin, which makes it very string. The growth of the secondary cell wall is called secondary thickening. Plant sustainability and minerals Sustainability is when we?re using resources in a way that meets the needs of the present generation without destroying the environment/ using up all the resources so the future generations would have none left. (Doesn?t deplete resources) * Rope and fabrics can be made of plastics (form oil) but are more sustainable if made from plant fibres. Because less fossil fuel is used and crops can be regrown to maintain the supple for future generations. * Products made from plant fibres are biodegradable, and can break down by microbe. Plants are also easier to grow and process than extracting and processing oil, making them cheaper. However, ropes made from plant fibres are generally not as strong as ropes made of plastic * Plastic are usually made from oil, some can be made from starch - these are bioplastics. ...read more.

- Scientists can study how plants can be successfully grown from seeds, this is useful for when they?re reintroduced back to the wild. - Can grow endangered plants for use in medical research, as new crops/material. This means endangered plants won?t have to be removed from the wild. * There are also disadvantages: - Testing seed for viability regularly can be expensive and time consuming. - May be difficult to collect seed from plants in remote locations. - Only studying plants from seeds in a seedbank limits the data to small, interbred populations - info gained may not be representative of wild plants. * Zoos have captive breeding programmes, which involves breeding animals in a controlled environment. * The programmes normally breed species that are endangered or are already extinct in the wild. This helps to increase their numbers. * Some animals can have problems breeding outside their natural habitats, which can be hard to recreate in a zoo. Also, many people think it is cruel to keep them in captivity. * Reintroducing plants grown from seedbank or animals bred in zoos can increase their numbers in the world. This helps to conserve their numbers or bring them back from the brink of extinction. * This could also help organisms that rely on these endanger plants/animal as food, or as part of their habitat. This reintroduction can also contribute to restoring habitats that have been lost, for example. Rainforests that have been cut down.. * Reintroduced organisms could bring new diseases to habitats - harming other organisms that live there. Also, they may not behave as they would if they?d been raised in the wild. I.e. Problems finding food or communication with wild members of their own species. * Research in zoos increases knowledge about the behaviour physiology and nutritional needs of animals - contributing to conservation efforts in the wild. Zoos can also carry out research that?s not possible for some species in the wild, i.e. Nutritional or reproductive studies. However, animals in captivity may act differently to animals in the wild. ...read more.