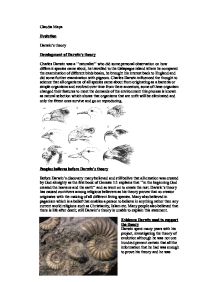 Evolution - Darwin and the Christian view. Before Darwins discovery many believed and still belive that all creation was created by God almighty as the first book of Genesis 1:1 explains.

Claudia Maya Evolution Darwin's theory Development of Darwin's theory Charles Darwin was a ''naturalist'' who did some personal observation on how different species came about, he travelled to the Galapagos island where he compared the examination of different birds beaks, he brought his interest back to England and did some further examination with pigeons. Charles Darwin influenced the thought to science that all organisms of all species came about from originating as a bacteria or simple organisms and evolved over time from there ancestors, some of these organism changed their features to meet the demands of the environment this process is known as natural selection which shows that organisms that are unfit will be eliminated and only the fittest ones survive and go on reproducing. Peoples believes before Darwin's theory Before Darwin's discovery many believed and still belive that all creation was created by God almighty as the first book of Genesis 1:1 explains that ''in the beginning God created the heavens and the earth'' and so went on to create the rest. Darwin's theory has caused contrivers among religious believers as his theory proves that no creator originates with the making of all different living species. Many also believed in paganism which is a belief that enables a person to believe in anything rather then any current world religions such as Christianity, Islam etc. ...read more.

As there is much evidence missing in this theory this theory cannot be proved to be a fact, although some may argue that it is a complete fact. Reference: www.big-bang-theory.com All organic matter and organisms have a certain pattern that science cannot explain. For example all living things such as human beings and animals are made up of cells, organs and systems. These are organised such that they function perfectly. The way these organs and systems are organised suggests that some higher authority is behind it. Scientist discovered the periodic table of elements; however the periodic table of elements is settled in to organised groups and in periods. The prefect nature of how these elements fit in to these groups yet again suggest that there may be creator behind this powerful work. Questions science can not explain Still there remain questions that are beyond scientific explanation, such as does life after death exist? Science explains that when a person ceases there bodies decease and they rote away and that nothing happens afterwards, however many religious believers believe that there is life after death, after a person dies they do decease and rot away but on the great day of judgment God will resurrect the righteous ones john 5 :28-29 says ''do not marvel at this, because the hour is coming in which all those in the ...read more.

Darwin wasn't aware of the mechanisms of hereditary traits (he didn't know about DNA and Genes); the discoveries done by Mendel (a Catholic priest I believe) and the later discovery of DNA helped the scientific community to improve on Darwin's work. Technically strict Darwinism has been replaced by 'the New Synthesis'. There is no doubt within the scientific community about the facts of evolution (species changing over time and becoming new species and related species sharing common ancestry) but differences still remain about the various mechanisms and other factor, others may totally agree with the idea as some and some religious believers may also find Darwin's theory offensive as our sharing a common ancestor with apes or an old earth seems blasphemous. Conclusion From my personal examination, observation and from judging from the evolution theory I have come to know that as there are patterns on all creations, which shows how well organised and classed all creations are, this begins to questions us that there must be a genius behind these power full work. However Darwin's theory also has a questionable nature to it as well as some evidence i.e. bacteria becoming resistance to antibiotics after a long time use this relates to the adaptation of organisms. Evolution and creation link together in way as they both explain the origin of life, although they both have much controversy but also share many similarities. ...read more.