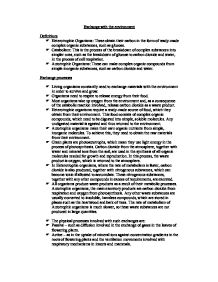 Exchange with the environment.

Exchange with the environment Definitions * Heterotrophic Organisms: These obtain their carbon in the form of ready-made complex organic substances, such as glucose. * Catabolism: This is the process of the breakdown of complex substances into simpler ones, such as the breakdown of glucose to carbon dioxide and water, in the process of cell respiration. * Autotrophic Organisms: These can make complex organic compounds from simple inorganic substances, such as carbon dioxide and water. Exchange processes * Living organisms constantly need to exchange materials with the environment in order to survive and grow. * Organisms need to respire to release energy from their food. * Most organisms take up oxygen from the environment and, as a consequence of the catabolic reaction involved, release carbon dioxide as a waste product. * Heterotrophic organisms require a ready-made source of food, which they obtain from their environment. This food consists of complex organic compounds, which need to be digested into simple, soluble molecules. Any undigested material is egested and thus returned to the environment. * Autotrophic organisms make their own organic nutrients from simple, inorganic molecules. To achieve this, they need to obtain the raw materials from their environment. * Green plants are photoautotrophs, which mean they use light energy in the process of photosynthesis. ...read more.

It is also present in many glands, where it has a secretory function. Squamous epithelium consists of thin, flattened cells with little cytoplasm. The nucleus of each cell is disc-shaped and centrally situated. Cytoplasmic connections exist between adjacent cells. The cells fit closely together and, when viewed from above, the margins of the cells are seen to be irregular (tesselated). This type of epithelium is found in the Bowman's capsule of the kidney, the alveoli of the lungs and lining the blood vessels and the chambers of the heart. Columnar epithelium is made up of tall, narrow cells. A large spherical nucleus is situated near the base of each cell and the free surface often possesses microvilli. Mucus-secreting goblet cells are often found amongst the columnar cells. This tissue lines the stomach and intestine, and is also present in some ducts of the kidney. Respiratory gas exchange As has already been mentioned, aerobic respiration is common to most living organisms and necessitates the uptake of oxygen and the release of carbon dioxide. Respiring cells are constantly using up oxygen and releasing carbon dioxide, so concentration gradients exist between the organism and its environment with respect to these gases. Usually within the organism there will be a lower concentration of oxygen and a higher concentration of carbon dioxide than in the environment, so oxygen tends to diffuse in and carbon dioxide diffuse out. ...read more.

In such cases, the oxygen-carrying capacity of the blood is increased by the presence of a respiratory pigment. In mammals, this pigment is haemoglobin and is present in specialised blood cells: erythrocytes. * The respiratory surface needs to be permeable to the respiratory gases. All cell surface membranes are permeable to oxygen, carbon dioxide and water. Gas exchange in flowering plants Gas exchange in the flowering plants involves the aerial parts, mainly the leave and stems. Leaves have a large surface area: volume ratio, which is favourable for the exchange of gases. Access to the respiring cells is by means of Stomata, which are pores in the epidermis of the leaves. Inside the leaf, the large intercellular air space in the spongy mesophyll facilitate the diffusion of gases and cells bordering these air spaces increase the total area available for gas exchange still further. During the day, when photosynthesis is occurring, the fixation of carbon dioxide maintains a concentration gradient of carbon dioxide between the interior of the leaf and the external atmosphere. The rate of diffusion of carbon dioxide is directly proportional to the concentration gradient, but it is also affected by factors such as the number and size of the stomata, the cuticle of the leaf and the layer of air surrounding the leaf. As these are factors which also affect the movement of water in the plant. ...read more.