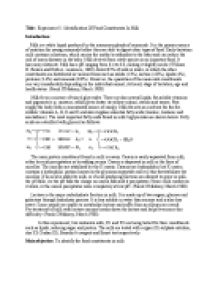 ﻿Title : Experiment 3 : Identification Of Food Constituents In Milk Introduction: Milk is a white liquid produced by the mammary glands of mammals. It is the primary source of nutrition for young mammals before they are able to digest other types of food. Early-lactation milk contains colostrum, which carries the mother's antibodies to the baby and can reduce the risk of many diseases in the baby. Milk derived from cattle species is an important food. It has many nutrients. Milk has a pH ranging from 6.4 to 6.8, making it slightly acidic (William H. Bowen and Ruth A. Lawrence, 2005).About 87% of milk is water, in which the other constituents are distributed in various forms such as solids (13%), lactose (4.8%), lipids (4%), proteins (3.4%) and minerals (0.8%). However, the quantities of the main milk constituents can vary considerably depending on the individual animal, its breed, stage of lactation, age and health status. (Frank O'Mahony, March 1988) Milk fat is a mixture of triacyl glycerides. There are also neutral lipids, fat-soluble vitamins and pigments (e.g. carotene, which gives butter its yellow colour), sterols and waxes. Fats supply the body with a concentrated source of energy. ...read more.

sulphate solution and water. Apparatus: Test tubes, cork, test tube rack, test tube holder, dropper, water bath incubator and stopwatch. Methods : 3C(i) Reducing sugar test 1. The water bath was brought up to boiling point and then turned down the source of heat but the temperature must be maintained. 2. 2cm³ of the milk K1 was mixed with 2cm³ of Benedict’s reagent in a test tube. 3. The test tube was placed in water bath for 5 minutes and shake occasionally. 4. The colour changed was observed and recorded. 5. Steps 1-4 were repeated with milk K2. All the observations were recorded. Methods : 3C(ii) Protein test 1. 2cmáµ of 10% potassium hydroxide solution was added to 2cmáµ of the K1 being tested and the tube was shook to mix the contents. 2. 0.5% copper sulphate solution was added a drop at a time, the tube was shake continuously. 3. Procedures 1 and 2 were repeated using K2. 4. All the observations were recorded. Results: Type of milk Reducing sugar test(Benedict’s test) Protein test(Biuret’s test) K1 When K1 was mixed with Benedict’s solution, the solution turns light blue. ...read more.

The test is so named because it also gives a positive reaction to the peptide-like bonds in the biuret molecule (n.a, n.d) The largest structures in the fluid portion of the milk are "casein micelles": aggregates of several thousand protein molecules with superficial resemblance to a surfactant micelle, bonded with the help of nanometer-scale particles of calcium phosphate. Each casein micelle is roughly spherical and about a tenth of a micrometer across. There are four different types of casein proteins: ?s1-, ?s2-, ?-, and ?-caseins. Collectively, they make up around 76?86% of the protein in milk, by weight. Most of the casein proteins are bound into the micelles (Fox, P. F., 1995).Milk contains dozens of other types of proteins beside the caseins including enzymes. These other proteins are more water-soluble than the caseins and do not form larger structures. Because they proteins remain suspended in the whey left behind when the caseins coagulate into curds, they are collectively known as whey proteins. Whey proteins make up approximately 20% of the protein in milk, by weight. Lactoglobulin is the most common whey protein by a large margin (McGee and Harold, 2004). Conclusion: Milk K1 is fat free and contains reducing sugar and a higher amount of protein content whereas milk K2 contains fat, high amount of reducing sugar but a lower amount of protein content. ...read more.