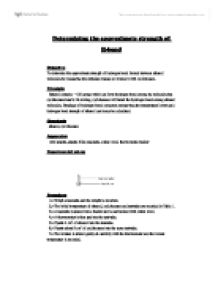 Experiment Objective. To determine the approximate strength of hydrogen bond formed between ethanol molecules by measuring the enthalpy change on mixing it with cyclohexane.

of moles of ethanol = E � [(0.81.4) � 46] = 1.36 kJmol-1 Precaution 1.> The test-tube should be used instead of beaker because the smaller in size of test-tube can reduce heat loss or heat gain from surroundings. For same reason, there is cotton wool between test-tube and beaker. 2.> Since both ethanol and cyclohexane are easily vapourize, the volume of substances added may be affected, so the transfer process and the experiment should be done as fast as possible. 3.> The ethanol - cyclohexane mixture should be stirred gently & carefully with the thermometer, to ensure heat is evenly distributed. 4.> Ethanol & cyclohexane are flammable, it should be ensure that there is no fire around. Discussion Hydrogen bond is defined as the the intermolecular force (or intramolecular force) formed between H atom attached to F, O, or N and the lone pair electrons on F, O or N. ...read more.