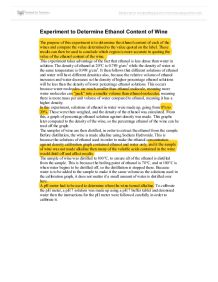 Experiment to Determine Ethanol Content of Wine The purpose of this experiment is to determine the ethanol content of each of the wines and compare the value determined to the value quoted on the label. These results can then be used to conclude which region is more accurate in quoting the value of the ethanol content of the wine. This experiment takes advantage of the fact that ethanol is less dense than water in solution. The density of ethanol at 20�C is 0.789 g/cm3 while the density of water at the same temperature is 0.998 g/cm3. It then follows that different solutions of ethanol and water will have different densities also, because the relative volume of ethanol increases and water decreases so the density of higher percentage ethanol solutions will be less than the density of lower percentage ethanol solutions. This occurs because water molecules are much smaller than ethanol molecule, meaning more water molecules can "pack" into a smaller volume than ethanol molecules, meaning there is more mass per unit volume of water compared to ethanol, meaning it has a higher density. In this experiment, solutions of ethanol in water were made up, going from 0% to 20%. These were then weighed, and the density of the ethanol was calculated. From this, a graph of percentage ethanol solution against density was made. ...read more.

This solution of Sodium Hydroxide was not needed to be standardised because the actual concentration of the alkali used does not matter, it is just the alkaline effects of the alkali that were needed. Each wine was brought to the same pH before distillation so that it would not affect any results. The liquid was then transferred to a round bottomed flask and this was connected to the distillation apparatus as shown above. Anti-bumping granules were also added to the liquid before distillation, to ensure the liquid did not distil over, meaning the experiment would have to be restarted. This liquid was then heated until it reached around 100�C, then heating was stopped and the distillate was transferred to a 50cm3 volumetric flask. This was then made up to the mark with deionised water, in order that the distillate is the same volume as the wine before distillation. This should give a solution of ethanol which has the same concentration as the wine. Some of this solution was transferred to the density bottle, and its density calculated in the same way as the solutions of ethanol in the first part of the experiment. This process was then repeated for each wine. The experiment was also carried out in duplicate, so two 50cm3 samples of each wine were measured out and distilled and their density calculated in order to gain more reliable results as an average of the two could then be taken. ...read more.

To overcome this, all values were doubled, so the smallest volume of ethanol was 1cm3 , which halved the uncertainty to 5% of it's total volume. When using the density bottle to weigh the solutions of ethanol and the samples from the wine, it had to be ensured that the density bottle was completely full, so that the solutions took up the total volume of the bottle without any air bubbles. This was to ensure that the mass of the solutions were recorded correctly to keep the experiment accurate. Also, the density bottle had to be completely dried on the outside, and this was done using a paper towel, to ensure that no solution on the outside of the bottle was weighed, which would affect results. The density bottle was also thoroughly rinsed out with the solution about to be weighed, to ensure that the previous solution did not contaminate the solution about to be weighed. The calibration graph was created using concentrations of ethanol ranging from 0% to 20% in 1% increments. This could have been made more accurate by increasing in smaller increments of ethanol concentration or going to a higher concentration of ethanol, but time constraints meant that this was not a possibility. However, because the points in the density against ethanol concentration calibration graph resembled a straight line, the calibration graph can be seen as mostly accurate. Overall, because the differences between densities and masses in each attempts of the experiment were quite small, the experiment can be seen as mainly accurate providing meaningful results. ...read more.

This is an excellent, highly accurate, very reliable report. It uses sophisticated equipment and fairly complicated science to make a valid conclusion
This piece of work is a 5*