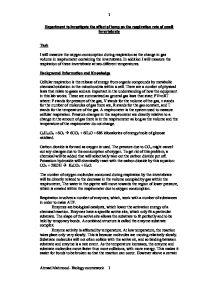 Experiment to investigate the affect of temp on the respiration rate of small invertebrate.

I will have a range of temperatures, including 10c, 20c, 30c, 35c and 40c. Dependant - The dependant include the result. The volume of oxygen will be different in each experiment. Control - These are all the things I will try and keep in control, these include volume of KOH, and same maggots used in every experiment, concentration of KOH, PH levels, initial volume of oxygen, glass beads proportionate to maggots, same equipment. I will try my hardest to control all of these by keeping a close eye while doing the experiment. Equipment Screw-clip Weighing Scale Lab Coat Eye Protection glasses Gauze platform KOH-15ml Glass Beads (equivalent weight to maggots) 1000cm3 Beaker Rubber Tubing - 4 pieces Capillary U-tube containing Dyed water 1cm3 Syringe 2 Boiling tubes 6 Maggots Ice Cork borer - 2.5cm (diameter) Stopwatch Electrical water bath Thermometer Measuring Cylinder - 100ML Screw Clip Method 1. Half fill a manometer with fluid (dyed water) and connect to 1cm3 syringe to the three-way tap attached to one arm of the manometer. 2. Place equal volumes of KOH at the bottom of each of the two boiling tubes and then place a zinc-gauze platform 1 cm above the KOH. 3. Place the invertebrate in one boiling tube (experimental) and an equal volume of glass beads in the other test tube (control). ...read more.

There could be a number of mistakes in the initial stages of this experiment. These could be any or even a mixture of the following. I.e. we do not know if the maggots were fed before the experiment, this is important because if they were fed before then the respiration rate would be comparatively higher as compare to hungry maggots! Another factor that could have affected the accuracy could be the age of the maggots, they might not have been all the same age, this makes a difference because younger maggots would be more active there fore a higher oxygen demand as compared to older maggots, which are less active. The size of the maggots would also affect the rate of respiration; larger maggots would have a higher demand of oxygen as compared to the younger maggots. There are also different types of maggots, and we are not sure if the maggots are the same type or not, this would make a difference because different types of maggots would have different demands of oxygen intake. There might have been an error in the weighing of glass beads or maggots, or incorrect reading of the manometer scale. All these factors could have affected the accuracy of this experiment thus the result is not reliable. Method of Analysis I will analyse my results in following ways: - * Statistical Analysis * Standard Deviation * Mann Whitney U 1 1 Ahmad Mahmood- Biology coursework ...read more.