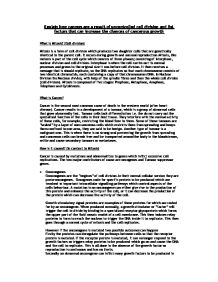 Explain how cancers are a result of uncontrolled cell division and list factors that can increase the chances of cancerous growth What is Mitosis? (Cell division) Mitosis is a form of cell division which produces two daughter cells that are genetically identical to the parent cell. It occurs during growth and asexual reproduction. Mitosis, like meiosis is part of the cell cycle which consists of three phases; consisting of interphase, nuclear division and cell division. Interphase is when the cell carries out its normal processes and grows to the original size it was before cell division. It then receives a message that is should replicate, so the DNA replicates so that each chromosome consists of two identical chromatids, each containing a copy of that chromosomes DNA. In Nuclear Division the Nucleus divides, with help of the spindle fibres and then the whole cell divides (cell division). Mitosis is composed of five stages: Prophase, Metaphase, Anaphase, Telophase and Cytokinesis. What is Cancer? Cancer is the second most common cause of death in the western world (after heart disease). Cancer results in a development of a tumour, which is a group of abnormal cells that grow abnormally fast. ...read more.

However if the onconogene is mutated two possible outcomes can happen: Firstly the proteins can deregulate the pathways between cells so that the receptor protein is mutated. If the receptor protein is mutated, it can no longer respond to the growth factors so triggers relay proteins to be produced which go on and cause the DNA and the cell to replicate. This is all done in the absence of the growth factor so reproduction is continuous and has no limits. Secondly an abnormal onconogene can inflict many growth factors to be produced in excessive amounts. This causes the receptor protein to be continually bound to a growth factor so replication rate is very fast. Both of these result in a formation of a lump of cells where growth has been excessive. This lump is called an adenoma. It can grow larger and invade surrounding tissue. Some cells may even break off and be transported from the body in the blood stream if it is malignant. If it is benign, the growth is sealed by non-cancerous local specialized cells and white blood cells. * Tumour Suppressor Genes Tumour suppressor genes are the "breaks" on cell division. ...read more.

Apoptosis is triggered by the gene P53. If this is lacking or mutated not only will it cause faulty cells to replicate (see above) but will not be able to destroy them when they do replicate. What factors increase the chances of developing cancer? (Carcinogenic factors) * Smoking - This is the biggest risk factor causing 30% of all cancers. It damages the lungs and causes dangerous chemicals such as Carbon Monoxide. * Age - as someone ages, genes will suffer damage just through day-to-day living * Alcohol consumption - Excessive alcohol consumption plays a role in mouth, throat, oesophagus and liver cancers. * Chemicals present in the combustion of fuel i.e. coal. * Heredity - Chances are much more likely of developing cancer if a family member has already had it due to inherited genes. * Sun/UV Exposure - Causes damage to epidermis of skin so it is more vulnerable. * Diet - poor diet (high animal fat content) can cause malnutrition and poor health of body increasing the chances of cancer. * Exercise - Not exercising can again cause poor health of the body, poor circulation etc increases the chances of cancer. * Occupation - if exposed to radiation, asbestos, silicon, dusts, etc. * Medication - radiation and/or drugs for one cancer can cause later cancers. ...read more.