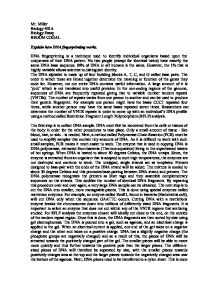 Mr. Miller Biology 401A Biology Essay BEG�M COGAL Explain how DNA fingerprinting works. DNA fingerprinting is a technique used to identify individual organisms based upon the uniqueness of their DNA pattern. No two people (except for identical twins) have exactly the same DNA base sequence. 99% of DNA in all humans is the same. However, the 1% that is highly variable allows scientist to distinguish identity. The DNA alphabet is made up of four building blocks-A, T, C, and G called base pairs. The order in which these are linked together determine the meaning or function of the genes they code for. However, not our entire DNA contains useful information. A large amount of it is 'junk' which is not translated into useful proteins. In the non-coding regions of the genome, sequences of DNA are frequently repeated giving rise to variable number tandem repeats (VNTRs). The number of repeats varies from one person to another and can be used to produce their genetic fingerprint. For example one person might have the bases CCCT repeated four times, while another person may have the same bases repeated seven times. Researchers can determine the number of VNTR repeats in order to come up with an individual's DNA profile using a method called Restriction Fragment Length Polymorphism (RFLP) analysis. The first step is to collect DNA sample. DNA must first be recovered from the cells or tissues of the body in order for the other procedures to take place. Only a small amount of tissue - like blood, hair, or skin - is needed. Next, a method called Polymerase Chain Reaction (PCR) must be used to amplify samples that contain tiny amounts of DNA. As it is difficult to work with such small samples, PCR makes it much easier to work. The enzyme that is used in copying DNA is DNA polymerase, extracted from bacteria (Thermus aquaticus) living in the superheated waters of hot springs. When DNA is heated to about 80 degrees Celsius, the DNA unzips. ...read more.

Biochemical genetic studies may be done from a blood sample, urine sample, spinal fluid, or other tissue sample, depending on the disorder. Another way of examining gene products, rather than the gene itself is through 'protein truncation' studies. Testing involves examining the protein made by a gene to see if it is shorter than usual. Certain mutations in genes can cause a protein to be truncated or shortened. With the protein truncation test, it is possible to measure the length of the protein the gene is making to see if it is the right size or shortened. These studies can be performed on a blood sample. These types of studies are often performed for disorders in which the known mutations predominantly lead to shortened proteins There are a large number of specific genetic tests. For example prenatal diagnosis is the genetic testing of a fetus. Prenatal testing is used to detect changes in a fetus's genes or chromosomes before birth. This testing is offered when there is a risk of bearing a child with the genes associate with mental retardation or psychical deformities. Pre-natal diagnosis is carried out using biochemical, chromosomal, and DNA-based genetic test and is widely available for the prenatal testing of conditions such as Down syndrome. In some cases it can help couples make decisions about pregnancy. However, it must be kept in mind that the testing cannot identify all disorders. Another genetic testing frequently done as a preventive health measure is newborn screening. As the name suggests it is carried out on newborn infants. In the United States this the routine testing for certain disorders is the most common for of genetic testing. For example, all states in the US test infants for hypothyroidism (a condition where the thyroid gland does not function normally) that is present at birth and phenylketonuria (a genetic disorder that causes mental retardation if left untreated). ...read more.

(some couples wish to freeze their embryos until a later date for varying reasons including carreer advancement). A stored embryo becomes an object which is "shelved," to be used at our convenience. A further concern is whether there is the risk of abnormalities to the future child. Many people are against the use of frozen embryos that are no longer needed by the mother for research (for example stem cell research). The destruction or damaging of some embyros during the course of research is a rigorosly contested issue. Some groups protest that these embryos have the right to life, and that they are just as much human beings as they are. Many christians regard it as abortion when embryos are disposed of instead of being implanted in the womb. Other ethical issues concern the well emotioanl and psychological wellbeing of the child. Some people feel that it will be unhealthy for the child when he learns how he was delivered. Some people argue that the child may feel inferior and inadequate if he finds out that the was not concieved through natural methods. The use of IVF provides a greater range of options for single people and same-sex couples wishing to have children. Although both groups already raise children, IVF makes the option much simpler and could make the option widespread. Once again some people object that this could give psychological problems to the child if they grow up without a mother/father role-model. Also, a lot of times the child grows up not knowing who his real father is, because often for single mothers have not met the sperm donners. In one case in 2001 a French woman received a lot of publicity as she had played the role of her brother's wife in order to give birth to have an egg fertilised by him. Some people considered this to be incest and found it highly unethical. On a purely theological level, IVF tends to interfere with the general religious idea that only God can create children. Therefore, many religious people oppose the concept strongly. ...read more.