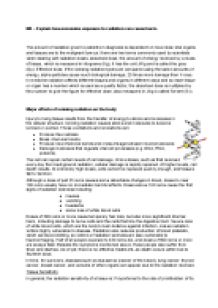 Explain how excessive exposure to radiation can cause harm.

M4 – Explain how excessive exposure to radiation can cause harm.

The amount of radiation given to patients in diagnosis is dependent on how close vital organs and tissues are to the malignant tumour, there are two terms commonly used by scientists when dealing with radiation doses, absorbed dose, the amount of energy received by a mass of tissue, which is measured in kilograms (Kg), It has the unit J/Kg and is called the gray (Gy). Effective dose, if the ionising radiation types are compared using the same amounts of energy, alpha particles cause much biological damage, 20 times more damage than X-rays. In medicine radiation affects different tissues and organs in different ways and so each tissue or organ has a number which is used as a quality factor, the absorbed dose is multiplied by this number to give the figure for effective dose, also measured in J/kg b called Sievert (Sv).

Major effects of ionising radiation on the body

High doses delivered to the whole body of healthy adults within short periods of time can produce effects such as blood component changes, fatigue, diarrhea, nausea and death. These effects will develop within hours, days or weeks, depending on the size of the dose. The larger the dose, the sooner a given effect will occur.

Cataracts are induced when a dose exceeding approximately 200-300 rem is  delivered to the lens of the eye.  Radiation-induced cataracts may take many months to years to appear.

The need for legislative requirements and dose limits

The isotope selection process is another effective method to reduce potential radiation exposures. The areas to be considered are: the radioactive half-life, the energy and type of emissions, the quantity of isotope, and the chemical form of the isotope. The half-life of the isotope selected can affect waste management. Generally, shorter lived isotopes are preferred over longer lived. 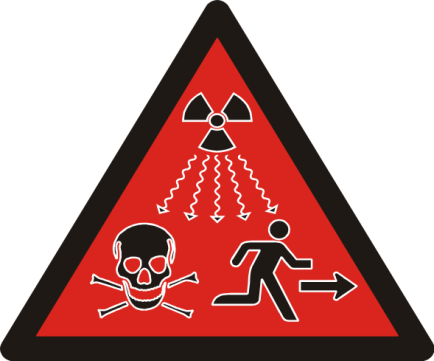