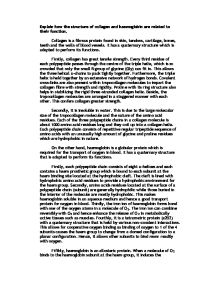 Explain how the structure of collagen and haemoglobin are related to their function.

Explain how the structure of collagen and haemoglobin are related to their function. Collagen is a fibrous protein found in skin, tendons, cartilage, bones, teeth and the walls of blood vessels. It has a quaternary structure which is adapted to perform its functions. Firstly, collagen has great tensile strength. Every third residue of each polypeptide passes through the centre of the triple helix, which is so crowded that only the small R group of glycine (Gly) can fit in. This allows the three helical a-chains to pack tightly together. Furthermore, the triple helix is held together by an extensive network of hydrogen bonds. ...read more.

On the other hand, haemoglobin is a globular protein which is required for the transport of oxygen in blood. It has a quaternary structure that is adapted to perform its functions. Firstly, each polypeptide chain consists of eight a-helices and each contains a haem prosthetic group which is bound to each subunit at the haem binding site located at the hydrophobic cleft. The cleft is lined with hydrophobic amino acid residues to provide a hydrophobic environment for the haem group. Secondly, amino acids residues located at the surface of a polypeptide chain (subunit) are generally hydrophilic while those buried in the interior of the molecule are mostly hydrophobic. ...read more.

This mechanism of oxygen binding is known as cooperative binding. Lastly, the Distal histidine (His E7) which is located near to where the O2 binds to the haem group serves two very important functions. It prevents haem groups on neighbouring haemoglobin molecules from coming into contact with one another and oxidizing to the Fe3+ state in which they no longer bind O2. In addition, it prevents carbon monoxide (CO) binding with the most favourable configuration to the Fe2+, thereby lowering the affinity of haem for CO. This is important, because once CO has bound irreversibly to the haem, the protein can no longer bind to O2. ?? ?? ?? ?? ...read more.

The response to the question is very well done. The answer is set out in a very clear and concise format, and the level of scientific analysis used is to a very high standard. The candidate clearly sets out the ...

The response to the question is very well done. The answer is set out in a very clear and concise format, and the level of scientific analysis used is to a very high standard. The candidate clearly sets out the different roles of the two molecules and how they differ from each other for being able to carry out their function.

The candidate explains the scientific structures of the different molecules well. However, the structure whilst being related to the function of tensile strength very well, could also go on to examine the role of collagen and the need for tensile strength in the biology behind tendons and so forth to get a higher grade. I'm not sure how collagen being insoluble in water relates to its function and the candidate should have made the reason clearer in their answer. The biology behind haemoglobin is explained much better and to greater scientific depth. The scientific terms used and the layout of the essay are both to a very high standard.

All punctuation, grammar and spelling are accurate in this essay.