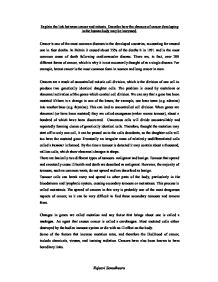 Explain the link between cancer and mitosis. Describe how the chances of cancer developing in the human body may be increased.

Explain the link between cancer and mitosis. Describe how the chances of cancer developing in the human body may be increased. Cancer is one of the most common diseases in the developed countries, accounting for around one in four deaths. In Britain it caused about 25% of the deaths h in 1991 and is the most common cause of death following cardiovascular disease. There are, in fact, over 200 different forms of cancer, which is why it is not necessarily thought of as a single disease. For example, breast cancer is the most common form in women and lung cancer in men. Cancers are a result of uncontrolled mitotic cell division, which is the division of one cell to produce two genetically identical daughter cells. ...read more.

Tumour that spread and eventually cause ill health and death are described as malignant. However, the majority of tumours, such as common warts, do not spread and are described as benign. Tumour cells can break away and spread to other parts of the body, particularly in the bloodstream and lymphatic system, causing secondary tumours or metastases. This process is called metastasis. The spread of cancers in this way is probably one of the most dangerous aspects of cancer, as it can be very difficult to find these secondary tumours and remove them. Changes in genes are called mutation and any factor that brings about one is called a mutagen. An agent that causes cancer is called a carcinogen. Most mutated cells either destroyed by the bodies immune system or die with no ill effect on the body. ...read more.

Burkitt's lymphoma, for example, is caused by a virus and is the mist common cancer in children in certain parts of Africa. Cervical cancer is an example of a type of cancer that can be transmitted sexually. Some people are said to have a hereditary predisposition to cancer, due to it being common in their families. This provides evidence of a genetic link. In most cases thought the disease itself is not inherited but susceptibility to the factors that cause the disease are. However some forms of cancer do appear to be caused by the inheritance of a single faulty gene. For example, Retionblastoma, which is caused by an error in chromosome 13. It is believe that development of a malignant cancer cell involves several step and is not cause by just one factor, but more than one working over several years. Rajeevi Senadheera ...read more.

This is a very well written report.
1. The sources of information need to be referenced
2. The report could be improved by including images and researched figures to back up particular aspects
3. The conclusion is very brief and does not fulfil the title
****