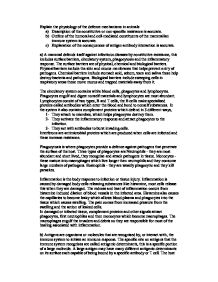 Explain the physiology of the defence mechanisms in animals.

Explain the physiology of the defence mechanisms in animals a) Description of the constitutive or non-specific resistance is accurate. b) Outline of the humoral and cell-mediated constituents of the mammalian immune system is accurate. c) Explanation of the consequences of antigen-antibody interaction is accurate. a) A mammal defends itself against infectious diseases by constitutive resistance, this includes surface barriers, circulatory system, phagocytosis and the inflammatory response. The surface barriers are of physical, chemical and biological barriers. Physical barriers include the skin and mucus membranes that helps prevent entry of pathogens. Chemical barriers include stomach acid, sebum, tears and saliva these help destroy bacteria and pathogens. Biological barriers include sweeping cells in respiratory areas these move mucus and trapped materials away from it. The circulatory system contains white blood cells, phagocytes and lymphocytes. Phagocytes engulf and digest nonself materials and lymphocytes are most abundant. Lymphocytes consist of two types, B and T cells, the B cells make specialised proteins called antibodies which enter the blood and bond to nonself substances. In the system it also contains complement proteins which defend in 3 different ways, 1- They attach to microbes, which helps phagocytes destroy them. ...read more.

Each T cell and each antibody is specific for a single antigenic determinant. There are two interactive immune responses, the humoral immune and cellular immune response. In the humoral immune response antibodies react with antigenic determinants of a foreign invaders blood, lymph and tissue fluid. Some antibodies are soluable and travel free in the blood and lymph, others exist as integral membrane proteins on specialised lymphocytes called B cells. The first time a specific antigen invades the body it may be detected by and bind to by a B cell whose membrane antibody recognises one of its antigenic determinants. This activated B cell forms a plasma cell that makes multiple copies of an antibody with the same specificity as the membrane antibody. The cellular immune response is directed against an antigen that has become established within a cell of the host animal. It detects and destroys virus infected or mutated cells, without the use of antibodies. T cells within the lymph nodes, bloodstream and intercellular spaces carry this out. T cells have integral membrane proteins called T cell receptors, they have specific molecular configurations that bind to specific antigenic determinants, and once the T cell is bound to a determinant it initiates an immune response. ...read more.

Autoimmunity relates to an immune response by the body aganst one of its own tissues, cells or molecules this can result indisease, for example multiple sclerosis causes damage to the nervous system. It involves both Tcell and B cell mediated attack on two major proteins in myelin the membrane that coats the nervous tissue. Causes of autoimmunity diseases are not known. Hypersensitivity is another type of condition that can arise when the immune system over reacts to a dose of antigen, although the antigen may present no danger to the host, the inappropriate immune response may produce inflammation and other symptoms that can cause illness or death. A consequence of organ or tissue transplantation caused by the transplant recipient's (host's) immune response to the transplanted organ/tissue which can damage or destroy it.The immune system distinguishes "self" from "foreign" by reacting to proteins on the surfaces of cells. It reacts against substances it recognizes as foreign (antigens). The presence of foreign blood or tissue in the body triggers an immune response that can result in blood transfusion reactions and transplant rejection when antibodies are formed against foreign antigens on the transplanted or transfused material. ...read more.