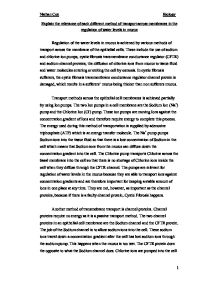 Regulation of the water levels in mucus is achieved by various methods of transport across the membrane of the epithelial cells. These include the use of sodium and chlorine ion pumps, cystic fibrosis transmembrane conductance regulator (CFTR) and sodium channel proteins, the diffusion of chlorine ions from mucus to tissue fluid and water molecules entering or exiting the cell by osmosis. In cystic fibrosis sufferers, the cystic fibrosis transmembrane conductance regulator channel protein is damaged, which results in a sufferers’ mucus being thicker than non sufferers mucus.

Transport methods across the epithelial cell membranes is achieved partially by using Ion pumps. The two Ion pumps in a cell membrane are the Sodium Ion (Na+) pump and the Chlorine Ion (Cl-) pump. These ion pumps are moving Ions against the concentration gradient of Ions and therefore require energy to complete this process. The energy used during this method of transportation is supplied by adenosine triphosphate (ATP) which is an energy transfer molecule. The Na+ pump pumps Sodium ions into the tissue fluid so that there is a low concentration of Sodium in the cell which means that Sodium ions from the mucus can diffuse down the concentration gradient into the cell. The Chlorine pump transports Chlorine across the basal membrane into the cell so that there is no shortage of Chlorine ions inside the cell when they diffuse through the CFTR channel. The pumps are relevant for regulation of water levels in the mucus because they are able to transport ions against concentration gradients and are therefore important for keeping a stable amount of ions in one place at any time. They are not, however, as important as the channel proteins, because if there is a faulty channel protein, Cystic Fibrosis happens.

by the Cl- pump and then they diffuse out of the cell through the CFTR protien into the mucus. This is part of the hydrating process of the mucus when there is not enough water in the mucus. The channel proteins are possibly the most relevant trasport method across the membrane as with out them there would be too many chlorine ions or sodium ions in one place at a time. This is what happens to Cystic Fibrosis sufferers.

Diffusion is another important factor in conducting transmembrane transport processes. It is used for four different transport tasks in regulation of water levels in mucus. These are; Cl- travelling through the CFTR channel protein into mucus, Na+ travelling down a concentration gradient into the cell through the Sodium channel, Chlorine ions diffusing down an electronegativity gradient into tissue fliud when there is excess water in the mucus, and finally, when more water is required in the mucus, Na+ ions travel from tissue fluid to mucus down an electronegativity gradient via diffusion. This is also a very important factor in water level regulation in the mucus because it creates a concentration gradient over which osmosis can move the water so that mucus has the right level of water in it. Without diffusion happening to move ions, there would be no gradient for osmosis to happen and regulation of water levels in mucus by the epithileal cells would be almost impossible.

Osmosis is the fourth method of transport across epithelial cell membranes and is probably the most vital part of transmembrane transport system in regulating water levels in mucus, as this is the transport method which moves water across the cell membrane. Osmosis works when by water crossing the membrane from an area of low solute concentration to an area which has the opposite, a high solute concentration. This is why the Ion pumps and the Channel proteins are required. They move the Na+ and Cl- ions in order to create this concentration gradient, which means that water can travel by osmosis, across the cell membrane to regulate the level of water in the mucus. This is the most relevant transport method to the regulation of water levels in the mucus because this is the process during which the water is removed or added to the mucus, so without this process, the water levels in the mucus would not be able to be regulated and problems would occur.

An example of a problem within the water regulation system is cystic fibrosis. Cystic fibrosis suffers have a problem with the CFTR channel protein which causes their mucus to become too thick. The cycstic fibrosis transmembrane conductance regulator (CFTR) protein is either not functioning fully or not functioning at all in a cystic fibrosis sufferer. The four proteins in the cell membrane are able to ‘sense’ whether ions are needed to be transported around the epithelial cell, mucus and tissue fluid,  however, they cannot communicate with each other as such, and therefore, if one is not working, for example the CFTR protein in a cystic fibrosis sufferer, the other three proteins will keep working as normal. This is how the mucus becomes dry. The epithileal cells become over loaded with Na+ and Cl- ions because Chlorine ions are diffusing down the electronegativity gradient to the tissue fluid, the Chlorine pump pumps Cl- ions into the cell and Na+ ions diffuse down the Sodium channel. The cell becomes dry and osmosis moves water from the mucus into the cell. This causes the mucus to become very dry, which is the main symptom of cystic fibrosis.

All four of these methods of transport across epithelial cell membranes are very relevant to the regulation of water levels in mucus. The most relevant to water regulation is probably osmosis, as this is the process which is actually removing or adding water to the mucus, but they all play a certain role in making osmosis possible and therefore they are all very important. Without any one of the transport systems, as demonstrated by the cystic fibrosis condition, serious problems can occur due to the fact that they all work together to regulate the amount of water in mucus.

The transport methods in action

When there is too much water: 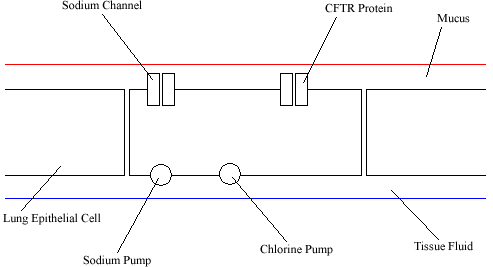 When there is too little water: