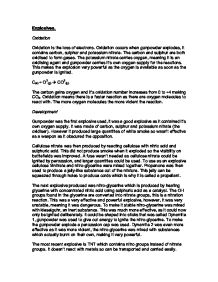 Explosives. Oxidation Oxidation is the loss of electrons. Oxidation occurs when gunpowder explodes, it contains carbon, sulphur and potassium nitrate. The carbon and sulphur are both oxidised to form gases. The potassium nitrate carries oxygen, meaning it is an oxidising agent and gunpowder carries it's own oxygen supply for the reactions. This makes the explosion very powerful as the oxygen is available as soon as the gunpowder is ignited. C(s) + O2(g) --> CO2(g) The carbon gains oxygen and it's oxidation number increases from 0 to +4 making CO2. Oxidation means there is a faster reaction as there are oxygen molecules to react with. The more oxygen molecules the more violent the reaction. Development Gunpowder was the first explosive used, it was a good explosive as it contained it's own oxygen supply. It was made of carbon, sulphur and potassium nitrate (the oxidiser). However it produced large quantities of white smoke so wasn't effective as a weapon as it obscured the opposition. Cellulose nitrate was then produced by reacting cellulose with nitric acid and sulphuric acid. ...read more.

To make the gunpowder explode a percussion cap was used. Dynamite 2 was even more effective as it was more violent, the nitro-glycerine was mixed with substances which actually burnt on their own, making it very powerful. The most recent explosive is TNT which contains nitro groups instead of nitrate groups. It doesn't react with metals so can be transported and carried easily. High Explosives and Low Explosives For an explosive reaction to occur energy has to be given out and therefore it must be exothermic. For this to happen the energy given out to the surroundings when bonds form has to be greater than the amount of energy taken in when bonds become broken. The strength of the explosive depends on the energy difference made between making and breaking bonds. The greater the difference the more forceful the explosion. For it to be an effective explosion the reaction must take place immediately so that the majority of energy is given out at the same time. ...read more.

This high temperature and pressure means that this way is very productive as it is a fast process, also made faster by the use of a catalyst. Health and Safety Experiments did not follow safety regulations , for example, Ascanio Sobrero was cut with pieces of glass on his hands and face, showing that no safety controls took place, such as goggles and a lab coat. Sobrero also tasted the chemicals he produced to see how harmful they were, and suffered side-effects. Experiments were not carried in controlled labs, but in homes, as a German scientist spilt some acid on a piece of clothing whilst he was completing an experiment. People who worked in factories were not properly cared for as they suffered from headaches and anaemia showing that they were given the correct equipment to protect them from the harmful effects of TNT. Nobel's brother was killed as a result of the experiments, so the further experiments needed to be carried out on a barge. This meant that if there was an accident then not many people would die from it and the damage would be limited. ...read more.