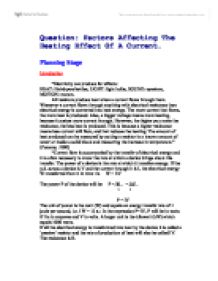 Factors Affecting The Heating Effect Of A Current.

Question: Factors Affecting The Heating Effect Of A Current.

“Electricity can produce for effects:

All resistors produce heat when a current flows through them. Whenever a current flows through anything with electrical resistance then electrical energy is converted into heat energy. The more current that flows, the more heat is produced. Also, a bigger voltage means more heating, because it pushes more current through. However, the higher you make the resistance, the less heat is produced. This is because a higher resistance means less current will flow, and that reduces the heating. The amount of heat produced can be measured by putting a resistor in a known amount of water or inside a solid block and measuring the increase in temperature.” (Parsons, 2000)

The unit of power is the watt (W)

The expression P = V²/R shows that for a fixed supply p.d. of V, the rate of heat production by a resistor increases as R decreases. Now R = pl/A, therefore P = V²A/pl and so where a high rate of heat production at constant p.d. is required, as in an electric fire on the mains, the heating element should have a large cross-section area A, a small resistivity p and a short length l. It must also be able to withstand high temperatures without oxidizing in air (and becoming brittle). Nichrome is the material that best satisfies all these requirements.

Electric lamp filaments have to operate at even higher temperatures in order to emit light. In this case, tungsten, which has a very high melting-point (3400ºC), is used either in a vacuum or more often in an inert gas (nitrogen or argon). The gas reduces evaporation of the tungsten and prevents the vapour condensing on the inside of the bulb and blackening it. In projector lamps there is a little iodine which forms tungsten iodide with the tungsten vapour and remains as vapour when the lamp is working, thereby preventing blackening.” (Duncan, 1973)

“An effect of electrical current is that it heats the wire through which it is flowing.