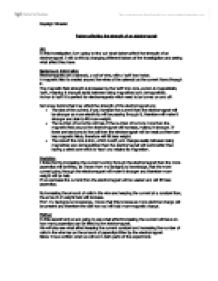 In this investigation I am going to find out what factors affect the strength of an electromagnet. I will do this by changing different factors of the investigation and seeing what affect they have.

Electromagnets are a solenoid, a coil of wire, with a ‘soft’ iron inside.

A magnetic field is created around the wires of the solenoid as the current flows through it.

The magnetic field strength is increased by the ‘soft’ iron core, as iron is magnetically ‘soft’, meaning it changes easily between being magnetized and demagnetized.

As iron is ‘soft’ it is perfect for electromagnets which need to be turned on and off.

Some key factors that may affect the strength of the electromagnet are;

* Switch the power on and turn it up until there is enough current to lift one paperclip. (4 volts)

** Switch on the power and turn it up until there is enough current to lift one paperclip. (4 volts)

* Increase the current by 2 volts and measure how many paperclips have been lifted.

** Increase the number of turns in the coil by 5 and measure the amount of paperclips lifted.

* Increase the current by 2 volts each time and note down how many paperclips have been lifted, so this until you reach 11 volts.

** Increase the number of turns in

When we kept the current constant and increased the number of turns in the coils by 5 then the amount of paperclips being held also increased, although we only managed to lift one or two each time.

When we increased the current by 2 volts each time, the amount of paperclips being held also increased by one more almost on each change.