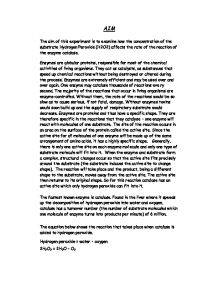 AIM The aim of this experiment is to examine how the concentration of the substrate Hydrogen Peroxide (H2O2) affects the rate of the reaction of the enzyme catalase. Enzymes are globular proteins, responsible for most of the chemical activities of living organisms. They act as catalysts, as substances that speed up chemical reactions without being destroyed or altered during the process. Enzymes are extremely efficient and may be used over and over again. One enzyme may catalase thousands of reactions every second. The majority of the reactions that occur in living organisms are enzyme-controlled. Without them, the rate of the reactions would be so slow as to cause serious, if not fatal, damage. Without enzymes toxins would soon build up and the supply of respiratory substrate would decrease. Enzymes are proteins and thus have a specific shape. They are therefore specific in the reactions that they catalyse - one enzyme will react with molecules of one substrate. The site of the reaction occurs in an area on the surface of the protein called the active site. Since the active site for all molecules of one enzyme will be made up of the same arrangement of amino acids, it has a highly specific shape. Generally, there is only one active site on each enzyme molecule and only one type of substrate molecule will fit into it. When the enzyme and substrate form a complex, structural changes occur so that the active site fits precisely around the substrate (the substrate induces the active site to change shape). The reaction will take place and the product, being a different shape to the substrate, moves away from the active site. The active site then returns to its original shape. So for this reaction catalase has an active site which only hydrogen peroxide can fit into it. The fastest known enzyme is catalase. Found in the liver where it speeds up the decomposition of hydrogen peroxide into water and oxygen, catalase has a turnover number (the number of substrate molecules which one molecule of enzyme turns into products per minute) ...read more.

Then I will get a large beaker and fill it catalase, I do not need to measure the amount but I will not need more than 30cm3. I will now fill the extra large beaker with water. then I will fill the burette will water and place it upside down in the extra large beaker, I will do this careful so I do not loose too much water. I can now clamp the burette tightly so it is carefully balanced. It does not matter if the water level is not exactly on 0cm3, as long as I record the level of water correctly before the start of the experiment. I will now use a syringe to measure 5cm3 of catalase into the test tube. I will then collect all the different concentrations of hydrogen peroxide (2.0, 1.5, 1.0, 0.5, 01 molar). I will then get a clean syringe and measure out 5cm3 of the 2.0 molar hydrogen peroxide and keep it ready in the syringe. I will then get the stop watch ready. I can now quickly transfer the hydrogen peroxide into the test tube containing the catalase and quickly place the rubber bung onto the test tube. This bung has a tube connected to it which is placed directly under the burette in the water. I will now start the stop watch as quickly as possible. I will then record the amount of gas given off by seeing how much the water level dropped. I will record the burette level after 3 minutes. From this I will be able to calculate the amount of oxygen given off. I will now do the same thing for all the other concentrations. FAIR TEST To make this experiment fair I will take many precautions- -I will try to keep the surrounding temperature the same. For example I will keep all the solutions out of the sunlight. ...read more.

This also appeared to be correct as at 1 molar the volume of gas given off was 2.1 cm3, and at 2 molar the amount of gas was 4.5 cm3, this is not exactly double but it is very close. The reason for this is that when you double the concentration there are twice as many substrate molecules reacting with the enzyme therefore the rate of the reaction would also roughly double. However I did obtain an anomalous result at 0.5 molar concentration. Because of this my graph was not as straight as it should have been. For example the graph of the average results of the class was much straighter. I think that the heat from my hands gave the enzymes more kinetic energy and so more collisions and reactions. Otherwise that I did not obtain any anomalous results. At 0.1 molar only a small reaction took place, which is why only a small volume of gas was given off. The reason for this is because there would have been only a small number of substrates available to bind with the catalase. However at 2.0 there were many substrate molecules available to bind with the catalase that's why 4.5 cm3 of oxygen was given off. I believe that if I was to keep increasing the concentration of the hydrogen peroxide after a certain concentration the rate of the reaction would stay the same as there would not be enough enzymes to cope with the excess substrate, therefore the substrate molecules will have to 'queue up' for an active site. So overall the graph shows what I predicted however because I did not keep increasing the concentration I would not be able to see whether the reaction would have eventually stopped. You can see that the gradients of the two graphs are very similar which show that my experiment was correct. Form this you can also say that the concentration is not directly proportional to the rate of reaction because the gradient is not 1 or near 1. ...read more.