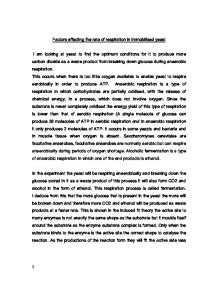 Factors effecting the rate of respiration in immobilised yeast

In this experiment I will be using different concentrations of glucose to observe the effects of different glucose concentrations the rate of respiration in immobilised yeast. Method To be able to test the rate of respiration within the yeast I will need an straightforward but accurate way of monitoring the yeast and the best approach to do this is to measure the amount of carbon dioxide produced, as a result I am going to use a method that will enable me to unmistakably see how quickly the carbon dioxide is produced. I will make "balls" of immobilised yeast; immobilised yeast are cells, which literally that have been attached to a support that takes the form of small beads. The techniques for immobilisation vary, but in this experiment I will be using is gel entrapment: the cell will be mixed with sodium alginate and distilled water to form the gel the enzyme remains "trapped" in the gel matrix. The pores will be large enough to let the substrate in, but not the cell out. Apparatus; 1. Test tubes with rubber bungs 2. Glass rods - for mixing the substances 3. Pipettes/ open syringes - to make balls of immobilised yeast 4. Beakers 5. ...read more.

to a pipette, as it was easier for me to control the height from which I was releasing the gel with immobilized yeast. To improve the experiment I would have used a temperature of 50?C to speed up the rate of reaction and also speed up the experiment, I would also have used bigger boiling tube so that I could have been able to see more accurately when the immobilized yeast reached the surface. My results overall were reliable, if I did one more experiment and left the first one out my results would have been a lot more reliable than now, as you can see on the graph the trend of my average is quite deceiving as two of my experimental results show a different shape on the 2% glucose concentration my third experiment has a very large drop in the 3% which showed up in the average. I do believe that my results are valid not taking into account the 1 pilot experiment. If I only used the results from my 2nd and 3rd experiment this would the graph of results. The non-anomalous results sow clearly that the higher the glucose concentration the shorter it took for the immobilized yeast to reach the surface of the glucose concentration. This shows that my hypothesis was correct. ?? ?? ?? ?? 1 ...read more.