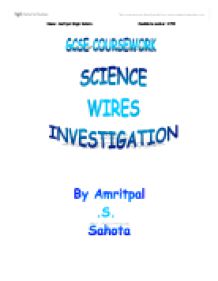 Find out whether a longer wire or a shorter wire will have more or less current flowing through the wires. 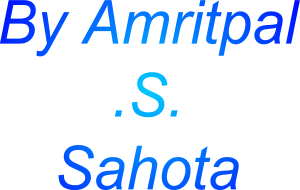 In this investigation, I am trying to find out whether a longer wire or a shorter wire will have more or less current flowing through the wires.

Resistance can be affected by the different thickness of wires. The thicker the wire, then there is less atom to block the path of the electrons and this means that there will be less resistance. However if the wire is thinner then there will be the same number of atoms but fewer electrons will be able to pass through the wire.

Therefore this means that there will be an increase in resistance. The reason due to this is that a thicker wire has more space around the atoms to allow electrons to pass. But in a thinner wire it will be the complete opposite.

Temperature is also a variable for resistance. When a filament lamp is turned on, the heating of the current causes the temperature of the filament lamp to rise very rapidly.

The reason why I think this will happen is because in the wire the electrons will be able to get passed more freely. This is shown in the diagram below.

(I) Current is what flows on a wire or a conductor like water flowing down a river. Current flows from points of high voltage to points of low voltage on the surface of a conductor. Current is measured in (A) Amperes or Amps.

(V) Voltage is the difference in electrical potential between two points in a circuit. It’s the push or pressure behind current flow and through a circuit, and is measured in volts (V).

(R) Resistance determines how much current will flow through a component. Resistors are used to control voltage and current levels. A very high resistor allows a small amount of flow. Resistance is measured in ohms. As the resistance is increased so will the current.

I think that the results I had taken was not enough to say what I found was true, because if I had taken the length into more consideration for e.g. going up in 5’s, I would have gathered more and precise results. I also think that considering that I done this experiment in year 9 we could have thought, that we would achieve more precise results if I had gone up in 5’s.

From this I think I could have got even more precise results. The anomalous results that I found was on graph’s 4 - 10 the reason why I think this is because of the variables that are the thickness of the wire, the materials of the wire, the length o the wire and the temperature. I think that I could say that my method is reliable and that someone off the street can follow my method.

In order to extend this work I could have carried out the same experiment but change the lengths of the wires from 10, 20, 30- 100cms. To 5, 10, 15, 20-100cms (so basically increasing in 5cm at each interval). I could also improve this and extend this by using different thickness of wires. Also by using different metal materials. This is because different metals are either poor conductors or good conductors. On the whole I would consider that my experiment was good enough to which a conclusion good be drawn.