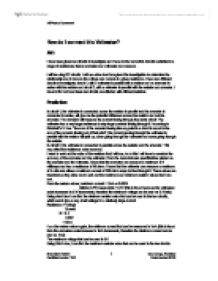 Find out which circuit is suitable for a range of resistances that an ammeter and voltmeter can measure.

How do I connect this Voltmeter?

I have been given two circuits to investigate and I have to find out which circuit is suitable for a range of resistances that an ammeter and voltmeter can measure.

I will be using DC circuits. I will use ohms law throughout the investigation to determine the relationship and to deduce the voltage and current at a given resistance. I have two different circuits to investigate; circuit 1, with a voltmeter in parallel with a resistor and an ammeter in series with the resistor and circuit 2, with a voltmeter in parallel with the resistor and ammeter. I have to find out how these two circuits are affected with different resistors.

In circuit 1, the voltmeter is connected across the resistor in parallel and the ammeter is connected in series, will give me the potential difference across the resistor and not the ammeter. The ammeter will measure the current flowing through the whole circuit. The voltmeter has a very large resistance to stop large currents flowing through it. According to Kirchhoff’s 1st Law “ the sum of the currents flowing into any point in a circuit is equal to the sum of

I will keep the resistor holders the same for both circuits, this is due to resistance, if I changed the holders, one may have a slightly higher or lower resistance.

The only variable I am changing throughout the investigation is the resistors. I will be observing the effect that changing the value has on the arrangement of the two circuits.

I have to ensure my investigation is safe. If the power supply was to overheat or a large current was to pass through the wires, a burn would be produced as well as damage to the equipment. To stop this happening I will keep the output EMF below 6 volts, these will be the 6 volts has shown on the voltmeter. Keeping the voltage below 6 volts will make sure that the amount flowing in the circuit is never too large to cause the wires to get hot. The power supply has built in protection to prevent a large current flowing. I will use a voltmeter to take a precise reading of the voltage throughout the circuit, not the power supply. This is because the output EMF that the power supply states cannot be relied on, due to internal resistance of all the components inside it.

The accuracy of the ammeter and voltmeter is a determining factor in obtaining accurate results. If they are slightly inaccurate this could make my results accurate. I do not think that anything was wrong with the accuracy of the ammeter and voltmeter. Using digital meters would be a better idea has the scales are extremely accurate and the correct resistance could be used, such as very high resistance for the voltmeter to reduce the current the current flowing through it. Parallax errors could have affected my results, as it is difficult to judge whether the meters needle is on one line or the other, depending on which angle you look at the meter. A digital meter would stop this error as it gives a reading in exact numbers.

If I was to repeat the experiment again, I would like to use digital meters to record the current and voltage because this would ensure that my results would be as accurate as they possibly could be. I would leave the power supply on for as little time as possible to stop the resistors heating up as I fink this increases their values.

I think my investigation did prove what I was trying to prove, what I discovered matched my prediction and circuit 2 was the best circuit to use.