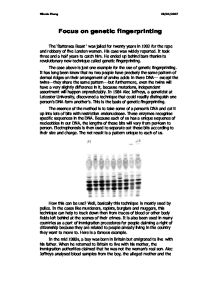 Focus on genetic fingerprinting The `Battersea Beast ` was jailed for twenty years in 1992 for the rape and robbery of five London women. His case was widely reported. It took three and a half years to catch him. He ended up behind bars thanks to revolutionary new technique called genetic fingerprinting. The case above is just one example for the use of genetic fingerprinting. It has long been know that no two people have precisely the same pattern of dermal ridges on their arrangement of amino acids in there DNA--- except the twins---they share the same pattern---but furthermore, even the twins will have a very slightly difference in it, because mutations, independent assortment will happen unpredictably. In 1984 Alec Jeffreys, a geneticist at Leicester University, discovered a technique that could readily distinguish one person's DNA form another's. This is the basis of genetic fingerprinting. The essence of the method is to take some of a person's DNA and cut it up into lots of bits with restriction endonuclease. ...read more.

When he returned to Britain to live with his mother, the immigration authorities claimed that he was not the woman's real son. Alec Jeffreys analysed blood samples from the boy, the alleged mother and the alleged brother and two sisters of the boy, who lived in Britain. According to the result, the mother shared half her DNA pattern with the boy, and half with the other children. The alleged brother and two sisters of the boy also shared the similar paternal bands in the fingerprint, showing that they all had the same mother. Presented with the evidence, the home Office had to admit the boy into the country in order to join his mother. [image004.gif] Since the genetic fingerprinting is so useful in many areas, governments are thinking about keeping a full copy of all the fingerprinting from everyone in the country. In Iceland the government has authorized a huge information-gathering project by the Icelandic genetic engineering company. ...read more.

they would check who was likely to do well at the job and who was likely to steal from the cash till. An insurance company could decide whether a new client was a good or bad risk. They could check whether the prospective client was likely to live to 95, or drop dead at 40. . People may think this kind of opinion worries a little bit too much, but it's happened already. In the United States, people have been denied health insurance and employment because they have `bad genes'. They armed services also take DNA tests of every new recruit. Discussing the proposed genetic fingerprinting collection on British television's Newsnight, Dr Karl Stefansson of decode Genetics commented: `It is the kind of information the medical research community has used to create new knowledge for a century, and without which we would not have medicine as we know it today.' But he also admitted, despite claims to confidentiality, that: `you can never guarantee that someone's genetic map will remain anonymous forever. ...read more.

This is a brief but well written report on genetic fingerprinting.
1. There are one or two incidents of key terms being used in the wrong way; these need to be rewritten.
2. The sources of information need to be referenced.
3. There is no conclusion; this needs to be added to the end of the report.
4. The report needs to be restructured using subheadings to organize the information.
***