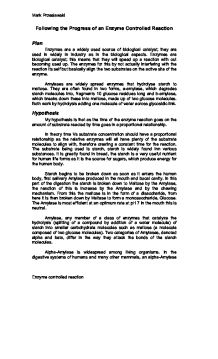 Following the Progress of an Enzyme Controlled Reaction

Following the Progress of an Enzyme Controlled Reaction Plan Enzymes are a widely used source of biological catalyst; they are used in widely in industry as in the biological aspects. Enzymes are biological catalyst; this means that they will speed up a reaction with out becoming used up. The enzymes for this by not actually interfering with the reaction its self but basically align the two substrates on the active site of the enzyme. Amylases are widely spread enzymes that hydrolyse starch to maltose. They are often found in two forms, a-amylase, which degrades starch molecules into, fragments 10 glucose residues long and b-amylase, which breaks down these into maltose, made up of two glucose molecules. Both work by hydrolysis adding one molecule of water across glycosidic link. Hypothesis My hypothesis is that as the time of the enzyme reaction goes on the amount of substrate reacted by time goes in a proportional relationship. In theory time Vs substrate concentration should have a proportional relationship as the relative enzymes will all have plenty of the substrate molecules to align with, therefore creating a constant time for the reaction. The substrate being used is starch, starch is widely found inn various substances. It is greatly found in bread, the starch is a very useful nutrient for human life forms as it is the source for sugars, which produce energy for the human body. Starch begins to be broken down as soon as it enters the human body, first salivary Amylase produced in the mouth and bucal cavity. In this part of the digestion the starch is broken down to Maltose by the Amylase, the reaction of this is increase by the Amylase and by the chewing mechanism. From this the maltose is in the form of a disaccharide, from here it is then broken down by Maltase to form a monosaccharide, Glucose. The Amylase is most efficient at an optimum rate at pH 7 in the mouth this is neutral. ...read more.

6) Test tube 6 is then made for 0.005% starch, this is simply a follow on from the rest of the trend, withdraw 1ml from test tube 4 and dilute with 9mls of distilled water. 7) Test tube 7 has then to 0.001% of starch, this is 1ml from test tube 5 and then diluted by 9mls of distilled water. From these dilution I will have 7 different concentration of the starch concentration, the next step is to line up the all the variations of concentration (8) and the proceed in putting them into the colorimeter one at a time. First make sure the blank shows 100% light transmission, and then proceed with the rest of the concentrations. The results gained now will be able to convert the light transmission from the core experiment and determine concentrations of the starch. Plot a calibration cure of transmission Vs known starch concentration. You will find a scale for starch concentration works better if you plot the log of starch concentration or use logarithmic graph paper. Estimate a best-fit curve through the points collected by the results; this will then estimate the starch concentration from the core experiment. The core experiment method: the main aspect of the experiment is to determine the rate at which the starch is broken down by the Amylase and to test the hypothesis. There fore another step process must be followed to accumulate a dependable accurate set of data. 1) First gather all the relative equipment that is necessary, as this experiment needs speed to make it work. Once you have assembled the 10 test tubes in the test tube rack along with the boiling tube for the break down of the starch. Add the Amylase enzyme to the Starch substrate and start the timer. The experiment has started and the breakdown of the starch will have begun. 2) Immediately withdraw 1ml from the solution using a clean pipette, transfer into a iodine calibration tube and mix thoroughly. ...read more.

This is because the nature of enzymes and how they act under certain conditions. 2) The size of cross sectional area was the same for every pipette used in the experiment.. The pipettes are most likely mass produced and are not manufactured with amazing amounts precision so it is likely that there could be some variation in the cross sectional area from different manometer tubes. There fore volumes measures could have varied if different pipettes were used during the experiment. 3) The substrate in the reacting solution had continuous fresh molecules being exposed to the enzyme. This could effect the light transmission% as if the enzymes only had molecules that had already been aligned they would there fore slow down the reaction as they cannot get to the fresh substrate. 4) The colorimeter always started on 0% at the start to test each individual vial containing the various samples from the 300 sec intervals. The colorimeters have tendencies to change or be undecided to where they are starting from as well as the decision of a Transmission %. This means that we have to assume it was o 0 every time we used the apparatus. Readings in the experiment were taken to the nearest whole unit, in this case transmission %. The measurements of the meniscus can vary from the different groups that carried out the experiment; there fore a 1ml error may have occurred when transferring the reacting solution into the iodine solution. This creates little change o the results and is of no relevance to change the raw data to accompany this error. Anomalies could be counted as the results show that the initial start for the enzyme to start working on the substrate took up to 300 secs and that the end of the experiment had no reason for a sudden decrease in rate. I feel that this is an unexplainable anomaly, which cannot be explained given the condition that the experiment was undertaken in. Mark Przeslawski Enzyme controlled reaction ...read more.