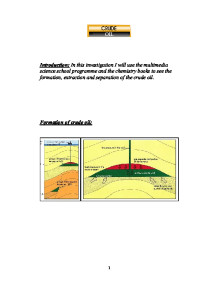 formation, extraction and separation of the crude oil.

Introduction: In this investigation I will use the multimedia science school programme and the chemistry books to see the formation, extraction and separation of the crude oil. Formation of crude oil: As the materials were washed into the sea, land was formed. The living material dies then the sand, mud and other materials settle on the top of the seabed covering the dead living material. Than the materials are covered and many layers are made and they become more and more compressed. Than as layers are made the living materials are squashed in the middle and they are turned into the oil and also have gas on top of the oil and also temperature and pressure cause chemical reaction and changes to oil. 150 years ago people drilled hole where the oil was out in the surface so that the can take what's in the underground. They also drilled holes where they think there was oil but sometimes they find and sometimes they didn't. Before to many ships were sunk to find oil but today it is an expensive business to find oil and we also have to do it with science so that we can find oil. The rocks contain oil and gas which are hidden from the view by sea or other rock layers the other thin is that we can not just drill holes and than see if we are lucky. Before we drill any holes we have to check the area and this is where geologists, geophysicists and the scientist came to study the area and the rocks. The geologists look at the makeup of the rocks. The geophysicists use the physical characteristics of rocks to find there magnetic and gravitational properties. There are many rocks and there are clear differences between them like the igneous rock or sedimentary or like the sand stone which is described as a muddy sediment that sank at the bottom of the sea at the same time as the organic materials went to form oil. ...read more.

The differences between alkanes and alkenes: Alkanes are a family of saturated hydrocarbons potassium and sodium in group 1 of the periodic table; they react with water to produce hydrogen and alkalie solution CnH2n+2 Alkenes are a family unsaturated hydrocarbon compounds, including ethene and propene, with the general formula CnH 2n Conclusion: In this experiment we used alkane and alkene to produce hydrogen the way that we did this was to heat the alkane and alkene so that they can speed the reaction and to make a chain compound which will produce hydrogen. Alkane and alkene are used in labs to make chemical reaction and its also used in polymerization, proteins, gasoline, waxes etc.We were certain what the gas was but if we want to find out we can do a pop test to make sure that it is the right gas produced. Evaluation: If I had another chance to do this experiment again I will do it in a laboratory and I will use more equipment to do it and also do the test a few times so that I can make sure that I did it right. Investigating fuels Aim: To investigate the heat output of different at the molecules level. So will release different hydrocarbon fuels and to see which gave the most. Hypothesis: The fuels are constructed differently at a molecules level. So will release different amounts of energy during combustion. Hydrogen+ Oxygen-->Carbon dioxide+ water+ energy Equipment: * Stand * Boss * Clamp * Boiling tube * Measuring cylinder * Ruler * Goggles * Thermometer * Burner * Stop watch * Test tube holder Diagram: Safety: Broken glass--> we walked and also got the equipment easily so that we can't break any thing. Eye damage--> we used goggles to protect our eyes. Fumes--> we turned on the fans Method: 1. We seat up the apparatuses as in the diagram. 2. ...read more.

They will mix the hydrocarbons together. So we mixed the two monomers to make the polymer which will be in the middle of the two chemicals so we used a forceps to take out the polymer. So that how we made polymers in the laboratory. The polymer we made was nylon. Polymer: A substance made of many repeating chemical units or molecules. The term polymer is often used in place of plastic, rubber or elastomer. A polymer is a natural or synthetic compound of high molecular weight composed of long chains of repeating units, each relatively light and simple. Polymers are extremely useful in the manufacturing industry. They can be used to create materials for clothing, such as nylon and lycra. Polymers can also be used for making tires and shoes. Everything from windshield wipers to airplane wing fairings can be made from engineered plastics and polymer composites (Reisinger). However, the applications do not stop there. Most recently, scientists have been conducting research on utilizing polymers to facilitate transdermal drug delivery. Polymers are "long molecular chains formed by the chemical bonding of many molecules of one or more types" (tenenbaum). They compose many different materials and can be found throughout everyday life. Polymers come in shapes of many forms, including plastic, rubber, and synthetic fibres among many others. Polymers can be used to create artificial skin that can facilitate the healing of wounds, especially for burn-victims. Chemicals: * 1, 6-Diamino hexane 5% aquaes. * Adipoyl chlorine% cyclohexane Equipment: * Goggles * Forceps * Monomer * Polymer * Monomer mask * Gloves Safety: * We wear goggles to protect our eyes from any gases. * We used a forceps so that we can get the polymer in the middle of the two chemicals. * We wear a monomer mask to protect our mouth from any gas which is dangerous to our body system. * We use gloves so that we can protect are hands from the two chemicals or any acid. ?? ?? ?? ?? 1 ...read more.