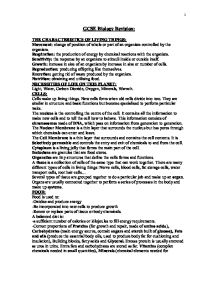 GCSE Biology Revision: THE CHARACTERISTICS OF LIVING THINGS: Movement: change of position of whole or part of an organism controlled by the organism. Respiration: the production of energy by chemical reactions with the organism. Sensitivity: the response by an organism to stimuli inside or outside itself. Growth: increase in size of an organism by increase in size or number of cells. Reproduction: producing offspring like themselves. Excretion: getting rid of waste produced by the organism. Nutrition: obtaining and utilising food. NECESSITIES OF LIFE ON THIS PLANET: Light, Water, Carbon Dioxide, Oxygen, Minerals, Warmth. CELLS: Cells make up living things. New cells form when old cells divide into two. They are similar in structure and basic functions but become specialised to perform particular tasks. The nucleus is the controlling the centre of the cell. It contains all the information to make new cells and to tell the cell how to behave. This information consists of chromosomes made of DNA, which pass on information from generation to generation. The Nuclear Membrane is a thin layer that surrounds the nucleus but has pores through which chemicals can enter and leave. The Cell Membrane is a thin layer that surrounds and contains the cell contents. It is Selectively permeable and controls the entry and exit of chemicals to and from the cell. Cytoplasm is a living jelly that forms the main part of the cell. Inclusions are granules that are food stores. Organelles are tiny structures that define the cells forms and functions. A tissue is a collection of cells of the same type that can work together. There are many different types of cells in living things: Nerve cells, blood cells, fat storage cells, water transport cells, root hair cells... Several types of tissue are grouped together to do a particular job and make up an organ. Organs are usually connected together to perform a series of processes in the body and make up systems. ...read more.

Thick layer of fat for heat insulation Desert animals lose little water as urine. Not the same need to conserve water, oily fur to prevent water clogging and reducing insulation Few mammals in the desert and those are mostly nocturnal. Mammals are warm-blooded, their temperature is constant whatever their surroundings. Mostly diurnal, awake during the day when it is slightly warmer. Mammal numbers limited by food supply- mainly carnivores. OTHER ANIMALS: -Cold blooded animals need warm temperatures to be active because their body temperature is the same as their surroundings. ADAPTATIONS OF PLANTS TO DRY CONDITIONS: -Thick cutide to reduce water loss. -Swollen stem, stalk or leaves to store water. -Leaves reduced in size to reduce water loss. -Leaves arranged in rosettes to shade each other. -Stem ridged to cast shade. -Spines to prevent animals eating swollen stem in order to obtain water. -Stomata only open at night in order to reduce water loss. -Shallow spreading roots to collect maximum moisture or deep to reach deep water. HUMANS AND THE ENVIRONMENT: Pollution from fossil fuels (fuels which are produced by heat and pressure acting on living material, the material lived millions of years ago and became buried over time. Eg: Oil, coal and natural gas...) domestic use, power stations, cars and other transport, industry etc... Problems include... Coal mining: -Open cast mining leaves scars on the countryside and reduces land availability for farming. It may be expensive to restore the area to other use when the coal is exhausted. -Waste form deep mine is dumped on the surface creating ugly tips which may be unstable and dangerous. -Land above deep mines is liable to subsidence. Oil production: -Pollution from leaks or shipping accidents damages wildlife, the environment and human beings. -There is risk of fires, and therefore air pollution, at production storage and processing areas. General problems: -Water used for cooling at power stations is released into rivers. ...read more.

HISTORY OF GENETICS: (MENDEL) The science of modern genetics was founded on the work of the Augustinian monk GREGOR MENDEL (born in 1822) He worked with pea plants in the monastery gardens. He was trained as a mathematician and this enabled him to analyse his results. His theories were that: -Each contrasting characteristic has its own separate controlling factor. -The factors must operate in pairs. -The pairs separate when s*x cells are formed -At fertilisation factors come together and pairs are restored. -The pairing is random. MUTATION: A mutation is a change occurring in one or more of the chromosomes: a change in the number of chromosomes, a chemical change occurring in an individual gene. Mutations take place because of Mutagens that include atomic radiation, x-rays, ultraviolet light, chemicals... SELECTIVE BREEDING: If an organism has advantageous characteristics, it is possible to produce more of that organism by controlling the way it breeds. Domestic animals, farm animals and crops have all been developed in this way. With crops it is possible to breed with itself by self-pollination (controlled by the grower) to ensure that the characteristics are passed on. With animals and plants you can cross related offspring or backcross to enhance characteristics. GENETIC ENGINEERING: Bacteria can be made to produce chemicals that we want by putting bits of DNA from other organisms into them. Enzymes are used to 'cut out' the DNA form one chromosome and other enzymes to insert it where needed. This method is used to produce the hormone Insulin. It is also used to insert genes into other organisms. CLONING: Producing many organisms from tissue sample of a parent organism. Vegetative reproduction of plants (including cuttings) is an example of this and has been used for some time. Now we can grow the plants from tiny sections. This system is called tissue culture. Sterile conditions have to be maintained so that the tiny samples can grow without damage or competitions form other organisms. Using this method it is easy to produce enormous numbers of plants of high yield (or disease resistant) crops from a single parent. 1 1 ...read more.