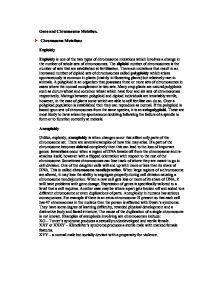 They have some degree of learning difficulty, retarded physical development and a distinctive body and facial structure. The cause of the duplication of a single chromosome is not known. Examples of aneuploids involving sex chromosomes include: XO - Turner's syndrome produces a sexually underdeveloped and sterile female. XXY or XXXY - Klinefelter's syndrome produces a sterile male with marked female features. XYY - a normal male but socially deviant with a propensity for violence. > Gene Mutations A gene is a sequence of nucleotide pairs which codes for a sequence of amino acids. Gene mutations occur on a smaller scale to chromosome mutations because they can occur to any base pair of any gene, anywhere along a chromosome. The coding length of a gene is typically 1200 to 1500 base pairs long. A change in one or more base pairs can cause a mutation which shows exactly how easy it is for this to occur. Sometimes the enzyme machinery occasionally inserts a base other than that coded by the template DNA. ...read more.

The frame shift may move along the functional code so that anything after it because misplaced and dysfunctional or the frame shift might even generate a stop codon thus prematurely ending the protein. The effects of mutations are only occasionally beneficial because after all a mutation is a random change in an established protein structure. In fact, many mutations are lethal, or at least disadvantageous. Most mutations are recessive to the normal allele so for a beneficial mutation to become present, it awaits many generations in the gene pool before chance brings the recessive alleles together. If replication of DNA proceeded as was described previously, the DNA polymerase wouold make a mistake on average about every 1000 base pairs. This level would be unacceptable, because too many genes would be rendered non-functional. Organisms have elaborate DNA proofreading and repair mechanisms, which can recognize false base-pairing and DNA damage, and repair it. The actual error rate is more in the region of one in a million to one in a billion. ...read more.