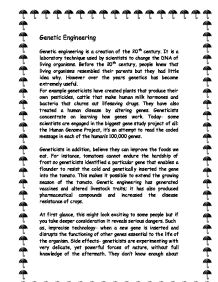 Genetic Engineering Genetic engineering is a creation of the 20th century. It is a laboratory technique used by scientists to change the DNA of living organisms. Before the 20th century, people knew that living organisms resembled their parents but they had little idea why. However over the years genetics has become extremely useful. For example geneticists have created plants that produce their own pesticides, cattle that make human milk hormones and bacteria that churns out lifesaving drugs. They have also treated a human disease by altering genes. Geneticists concentrate on learning how genes work. Today- some scientists are engaged in the biggest gene study project of all: the Human Genome Project, it's an attempt to read the coded message in each of the human's 100,000 genes. ...read more.

Side effects- geneticists are experimenting with very delicate, yet powerful forces of nature, without full knowledge of the aftermath. They don't know enough about living systems to perform DNA surgery without creating mutations, which could be harmful to the environment and our health. Widespread crop failure- when a farmer plants genetically engineered seeds, all the seeds will have identical genetic structure. As a result, if a fungus or virus attacks the crop, there will widespread crop failure. Genetics, furthermore, has a large number of health hazards. It can produce unexpected mutations in an organism, which can then produce a higher level of toxins in food. G.E. ...read more.

QUOTE: "Once we decide to begin the process of human genetic engineering, there really is no logical place to stop. If diabetes, sickle-cell disease and cancer are to be cured by altering the genetic makeup of an individual, why not proceed to other "disorders": myopia, colour blindness, left handedness. Indeed, what is to preclude a society from deciding that a certain skin colour is a disorder.?" The story of the great discoveries of genetics and genetic engineering is inspiring in itself. It shows men and women using patience and creativity to unravel one of the central mysteries of life. In addition, it offers hints about way that power given by this new knowledge maybe used- and perhaps misused- in the years ahead. This is an issue that deeply concerns us all. ...read more.