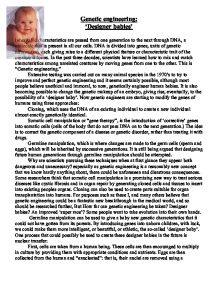 Genetic engineering: 'Designer babies' Inheritable characteristics are passed from one generation to the next through DNA, a molecule that is present in all our cells. DNA is divided into genes, units of genetic information, each giving raise to a different physical feature or characteristic trait of the creature it forms. In the past three decades, scientists have learned how to mix and match characteristics among unrelated creatures by moving genes from one to the other. This is "Genetic engineering." Extensive testing was carried out on many animal species in the 1970's to try to improve and perfect genetic engineering and it seems certainly possible, although most people believe unethical and immoral, to now, genetically engineer human babies. It is also becoming possible to change the genetic makeup of an embryo, giving rise, eventually, to the possibility of a 'designer baby'. Now genetic engineers are starting to modify the genes of humans using three approaches: Cloning, which uses the DNA of an existing individual to create a new individual almost exactly genetically identical. Somatic cell manipulation or "gene therapy", is the introduction of 'corrective' genes into somatic cells (cells of the body that do not pass DNA on to the next generation.) The idea is to correct the genetic component of a disease or genetic disorder, rather than treating it with drugs. ...read more.

The result is a reconstructed embryo in which the donor nucleus takes on the role of the nucleus that was removed and the resulting baby will be an exact genetic clone of the person whose cells were first multiplied in culture. (The donor cells could be transformed in culture, 'engineers' can manipulate them freely, either by adding genes, removing them, or changing their nature to give the baby the required characteristics before they are transferred into the eggs.) This is not medically necessary and would just aim to 'improve' future generations of human beings; to attempt this kind of improvement is known as eugenics. The prospect of a 'designer baby' is full of great risks. Genes usually do not control just one characteristic, so changing a gene is likely to have multiple consequences, we also know from experiments on animals and plants that once inserted, the foreign genes can behave unpredictably and may even 'shut down' in response to stress or extreme conditions, making it unlikely that the desired results will be produced without creating new problems. Many engineered plants are discarded because they are deformed and when researchers clone animals or manipulate the cells of animal embryos, the resulting creatures often have severe defects. It can take thousands of tries before the desired results are obtained. This attempt and discard attitude is acceptably in plant and possibly animal studies, where multiple generations can be bred to test if the genetic change performs as expected, but with humans, test generations cannot be bred in a lab. ...read more.

genetic improvements and those without, the divide between rich and poor would be permanently encoded in our cells the 2 species may even become unable to cross breed and with "as much romantic interest in each other as a current human has for a chimpanzee!" "Over time, our society will segregate into 'GenRich' who control the economy, the media, and the knowledge industry, and the 'Naturals' who work as low paid service providers or as labourers." In this way, he is against genetic engineering. Other arguments against it include the feeling that it takes away the child's individuality and that it is against the babies civil rights as it cannot consent to the changes that it will have to live with for the rest of its life. Human Germline engineering is at least a decade away from being on the commercial market but many firms are speeding development of the most controversial technologies. What's next? Some groups are trying to establish not only improvements to stop genetic disorders or improve the mental or physical abilities or appearances of humans but want to extend the human life span by decades or centuries! 'Designer baby' companies are already establishing high tech anti-aging centres across the US. Are we taking it too far? "No one can be sure how technology will evolve, but a techno-eugenic future appears ever more likely unless an organised citizenry demands such visions be consigned to science fiction dystopias. ...read more.