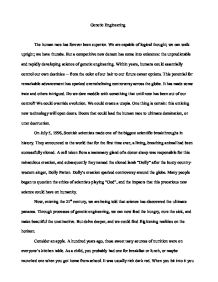 Genetic Engineering Should be Banned

Genetic Engineering The human race has forever been superior. We are capable of logical thought; we can walk upright; we have thumbs. But a competitive new demon has come into existence: the unpredictable and rapidly developing science of genetic engineering. Within years, humans could essentially control our own destinies -- from the color of our hair to our future career options. This potential for remarkable advancement has sparked overwhelming controversy across the globe. It has made some irate and others intrigued. Do we dare meddle with something that until now has been out of our control? We could override evolution. We could create a utopia. One thing is certain: this enticing new technology will open doors. Doors that could lead the human race to ultimate domination, or utter destruction. On July 5, 1996, Scottish scientists made one of the biggest scientific breakthroughs in history. They announced to the world that for the first time ever, a living, breathing animal had been successfully cloned. A cell taken from a mammary gland of a donor sheep was responsible for this miraculous creation, and subsequently they named the cloned lamb "Dolly" after the busty country-western singer, Dolly Parton. Dolly's creation sparked controversy around the globe. Many people began to question the ethics of scientists playing "God", and the impacts that this precarious new science could have on humanity. Now, entering the 21st century, we are being told that science has discovered the ultimate panacea. Through processes of genetic engineering, we can now feed the hungry, cure the sick, and make beautiful the unattractive. ...read more.

They wanted him to have the "cultural" experiences they did. So, they consciously attempted to create a major sensory defect in their child (Source C). This is the procedure of which science has dubbed creating "designer babies". If we allow this to continue, we will soon be faced with a whole new type of discrimination: one that's not based on the color of your skin, your gender, or by your mother tongue but instead by your genes. Just because medical information is kept private doesn't mean that genetic information will soon be kept in the same context. For instance, going to a job, they may not care about what you HAVE done. They will only care about what your genes say you COULD do. Now think of the huge difference between what you could do and what you can do. It is substantial. No longer will every child born into this world be given the same expectations. No longer will every child be given the same equal opportunity to shine. Again, people in favor of this technology will question, if every child is the same, why would this matter? In this case, another issue is raised: we will lose our bio-diversity. No longer will you have people of different heights, skin tones, eye colors, and so forth. Through the abuse of genetic technology, we could create a completely monotonous world. Would individual humans be considered as valuable if they were all alike? Why would someone care if 'John' were to die? ...read more.

It may seem inconvenient to give up a sedentary lifestyle. It may seem inconvenient to have to read the labels of the food we consume. But, I wonder how convenient it is to be at risk of getting, or even to have, a lifelong incurable condition that will inevitably end in premature death. Radically changing our lifestyles may be "inconvenient", but it also might be worth it. If you're still someone who is in favor of genetic engineering, consider this: scientists and engineers in China are set to release the first human robot to the public in less than ten years. This amazing feat of technology would be capable of cleaning your house, driving your car, and now thanks to genetic engineering, will be capable of all the thoughts that humans are. It will be immune to disease, bullet proof, and could build a family for itself, without human assistance. For the first time in history, we could become a species inferior to our own creation. But you can't turn this off like the "Twilight Zone". As of now, our world is getting closer and closer to the regular use and abuse of genetic engineering. Who knows? One day it may become nothing out of the ordinary: something so commonplace that it won't even be worthy of mention. Instead of this innovative science helping to feed the hungry, it could ultimately be harming them. Instead of curing the sick, we are encouraging disease. Instead of making the unattractive more beautiful, we are becoming purveyors of monotony. Genetic engineering is slowly progressing towards a narrow definition of perfection. Albert Einstein said it best: "It has become appallingly obvious that our technology has exceeded our humanity". ...read more.