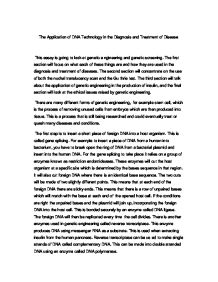 There are many different forms of genetic engineering, for example stem cell, which is the process of removing unused cells from embryos which are then produced into tissue. This is a process that is still being researched and could eventually treat or quash many diseases and conditions.

The first step is to insert a short piece of foreign DNA into a host organism. This is called gene splicing. For example to insert a piece of DNA from a human into bacterium, you have to break open the ring of DNA from a bacterial plasmid and insert into the human DNA. For the gene splicing to take place it relies on a group of enzymes known as restriction endonticleases. These enzymes will cut the host organism at a specific site which is determined by the bases sequence in that region. It will also cut foreign DNA where there is an identical base sequence. The two cuts will be made of two slightly different points. This means that at each end of the foreign DNA there are sticky ends. This means that there is a row of unpaired bases which will match with the base at each end of the opened host cell. If the conditions are right the unpaired bases and the plasmid will join up, incorporating the foreign DNA into the host cell. This is bonded securely by an enzyme called DNA ligase. The foreign DNA will then be replicated every time the cell divides. There is another enzymes used in genetic engineering called reverse transcriptase. This enzyme produces DNA using messenger RNA as a substrate. This is used when extracting insulin from the human pancreas. Reverse transcriptase can be used to make single strands of DNA called complementary DNA. This can be made into double stranded DNA using an enzyme called DNA polymerase.

Genetic screening is used to detect certain conditions in different groups of people or in a population of people. This is done when there is no previous history of a condition. There are many different ways in which screening is carried out, such as blood tests, ultrasounds and gene mutations which can lead to disease and genetic conditions, conditions such as Down’s Syndrome, Sickle cell and Cystic Fibrosis Some tests will be highly prognostic but others will give a result that can tell a single person how much of a risk they are compared to the population.  Genetic screening test are carried out to identify individuals who carry a gene that will cause a problem for them or their children. By taking a blood test or samples of tissues a change on chromosomes or changes in DNA can be seen. People from ethnic minorities can be offered the test as they will have higher than normal chances of contracting certain conditions. For example Tay-Sachs in Jewish people from Eastern Europe and Thalassemia in people from the Mediterranean and South East Asia. In 1994 there was a breakthrough when BRAC1, the breast cancer gene was isolated. This gene is thought to give certain women breast cancer earlier in life than normal people.

Genetic screening has been increasingly used in prenatal care. The tests are performed when the women are pregnant to provide info on the fetus. Most of the tests involve taking a sample of wither fetal blood, mothers blood, amniotic fluid or chorion. One test carried out on pregnant women is the nuchal translucency test. This is carried out to help detect Downs Syndrome in a fetus, particularly in older women where there is a higher risk. The scan takes place at 11 to 13 weeks of pregnancy. The test looks for a higher amount of fluid around the neck-known as nuchal translucency- which indicates a baby who has Down’s syndrome. It can also confirm the accuracy of the pregnancy dates and foetal viability. The scan is carried out at around 11 to 13 weeks because this is when the most accurate readings can be seen. The fetus must be in sagittal section and in a neutral position of the fetal head. The sonographer then enlarges the photo to 75% and the maximum thickness can then be measured from leading edge to leading edge. Foetuses, whose nuchal translucency is not normal, have a high risk of having an abnormality.

A test carried out after birth is the Guthrie or the heel prick test. It is used to test for phenylketonuria and congenital hypothyroidism for all babies. On the second or third day of life, a drop of blood is taken by pricking the heel if a newborn baby. The heel is pressed onto a piece of filter paper which collects the blood and is then sent to a laboratory. A disk is then punched out of the filter paper and placed onto a plate filled with agar gel. This plate contains Bacillus subtilis and B-2 thienylalanine. Each of these gels holds 60-80 disks and is able to promote bacterial growth. The B-2 thienulalanine inhibits bacterial growth. This however is overcome by the presence of extra phenylalanine which has leaked from the filter paper disk. The bacterium becomes visible in a day and the amount of growth, which is measured as the diameter of the colony, is approximately comparative to the amount of phenylalanine in the serum. The result is then read and compared to the reference disks that have standard phenylalanine content. In normal people phenylalanine levels are usually under 120   . The Guthrie test is so sensitive it is able to detect levels of 180-240   .

One of the first uses of genetic engineering was the production of human insulin from bacteria. Insulin is normally produced in the pancreas and is responsible for controlling levels of blood glucose in the body. Before this process was discovered, people with diabetes used cow or pig insulin, but some people were able to build up antibodies against it, therefore causing it to not work.  For this reason, scientists decided to look at synthesising Humulin by inserting it into E.coli.

The first stage is to isolate the gene which carries the information for making human insulin. They then made a copy of this gene and placed it into bacterium. Millions of copies of the bacteria that have had its plasmid combined with the insulin are needed in order to make insulin. The protein consists of B-galactosidase, which is joined to the A or B chain of insulin. These chains are then extracted and purified. These two chains are then mixed and reconnected, resulting in Humulin being produced.

Although genetic engineering has many benefits it also raises many ethical issues. Some people feel that it is wrong to mess around with nature and natural processes. Some questions that people are asking are: Are then any known health risks associated with Genetic engineering? Who will have access to these technologies? There are some known risks when crossing species boundaries, for example there is a small chance that fatal zoonotic diseases such as mad cow disease may be transferred.  Introducing this to the human race could have devastating consequences. Another issue is the fear of creating a new disease that cannot be treated. Many people have argued that it would be wrong to create animals that will suffer for the sake of research. Genetic screening also carries many ethical issues. If people are screened for certain diseases, what happens after this? Do they have to decided whether to get married and put someone else’s life at risk, or should someone else decide it for them? Some people believe that being able to decide whether a baby should be aborted on the basis of knowing if they have an illness is almost like ‘playing God’.

In conclusion, genetic engineering is a process that allows scientists to alter genes in both humans and plants. It is used to help and aid many different people. Genetic screening is used to detect certain conditions in groups of people. It is vastly used in prenatal screening to see whether the foetus is abnormal. There are many ethical issues raised, and many people feel it is unnatural to alter the natural world, but to most the benefits beat the downsides hands down.