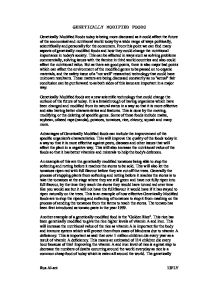 GENETICALLY MODIFIED FOODS Genetically Modified Foods today is being more discussed as it could affect the future of the economical and nutritional world today by a wide range of ways politically, scientifically and personally for the consumers. From this point we can find many aspects of genetically modified foods and how they could change the nutritional importance in today's society. This can be affected in ways such as solving problems commercially, solving issues with the famine in third world countries and also could affect the nutritional value. But as there are good points, there is also major bad points which can affect the environment of the modified genes to be passed on to organic materials, and the safety issue of a "not well" researched technology that could have unknown resultants. These matters are being discussed constantly as no "actual" fair conclusion can be put forward to as both sides of this issue are important in a major way. Genetically Modified foods are a new scientific technology that could change the outlook of the future of today. It is a breakthrough of having organisms which have been changed and modified from its natural status in a way so that it is more effective and also having better characteristics and features. ...read more.

This will increase the nutritional value of the rice as vitamin A is important for the body and immune system which will protect them from cases of blindness due to vitamin A deficiency. This is important as said that over 1 million children die every year as a result of vitamin A deficiency. This means an estimated of 114 children die every hour because of this! Improving the vitamin A and iron level of rice is a great step to decrease the numbers of deaths occurring around the world everyday as rice is a common cheap food of today which is eaten all around the world. The genetically modified "Golden Rice" has yet to be planted in field trials yet as more research is being developed on this major breakthrough. As farmers have problems with having to put up with pests and diseases that could cause a major problem with the crops and production of the foods, genetically modified could help this in a range of ways. For one, a singe diseases or a virus could cause a major plague that could cause the whole crop to die off, this will cost the farmer the year's crop and stock gone. ...read more.

If this gene escapes and mixes into other plants in nature it will cause totally unknown and likely to be dangerous outcomes. This is very important for these genetically modified foods to be kept strictly in control and not be released in the environment in anyway. As both sides of this issue have been discussed in an equal matter we can see that both of these issues are important in a major way which both have important effects. We cannot afford to risk such a new technology just yet as it could cause a major threat to the world. But this threat is only estimated and there have been no real proof that any problems have been caused from these genetically modified foods. The new features and characteristics of these foods are very useful in today's society as they have very efficient effects that will help us in many ways. As you can see, a real conclusion can not be developed as this issue has not been finished. There are many scientists still researching Genetic Engineering and it is a new technology at the moment. More research must be done with this to get a relevant conclusion today. For now we must wait for a valid conclusion to be called in the near future. Rua Al-ani 13FLY ...read more.