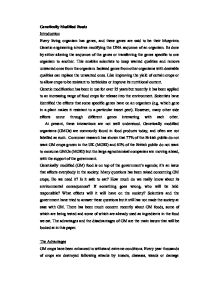 Genetically Modified Foods Introduction Every living organism has genes, and these genes are said to be their blueprints. Genetic engineering involves modifying the DNA sequence of an organism. Its done by either altering the sequence of the genes or transferring the genes specific to one organism to another. This enables scientists to keep wanted qualities and remove unwanted ones from the organism. Isolated genes from other organisms with desirable qualities can replace the unwanted ones. Like improving the yield of certain crops or to allow crops to be resistant to herbicides or improve its nutritional content. Genetic modification has been in use for over 25 years but recently it has been applied to an increasing range of food crops for release into the environment. Scientists have identified the effects that some specific genes have on an organism (e.g. which gene in a plant makes it resistant to a particular insect pest). However, many other side effects occur through different genes interacting with each other. ...read more.

This will certainly increase the yield as many of the GM crops can survive these harsh conditions compared to organic ones. This in turn will provide more food for the growing population. As GM crops can withstand such conditions, there will be little or no need for pesticides/insecticides. Hence the effect of having trace particles of insecticides in our food following crop spraying would be reduced. When the use of these pesticides is reduced our environment becomes friendlier. These pesticides when used find their way into the local water system; water companies spend a huge sum of money purifying water because of poison within the pesticides polluting them. When GM is used the damage to water system will be reduced as less pesticides is used. Controlled maturation time is another advantage that can be gained from using GM crops. For example, researchers at Singapore's National University are reported to have developed a system of modifying genes to delay fruit ripening by up to four months. ...read more.

Even if not vegetarian, Jews and Muslims would oppose the introduction of pig genes in plants and Hindus would most certainly also oppose any gene enhancements involving cow genes. Some Christians too share strong views over the genetic modification of organisms. In principle they see this as an excessive and unacceptable manipulation of, and intervention in God's creation and a total violation of natures natural barriers. Conclusion GM foods are not necessarily bad, but permitting the expansion of GM crop planting and use in our food without proper knowledge as to the effects, both short and long term, is at best unwise and at worst highly dangerous. It's not just we humans who could suffer, but ultimately many animal and plant species as well. Can biotech companies really be sure that their products will have no undue effects on biodiversity and food chains, and indeed on people's health? Until they are, the mass introduction of GM crops should not be permitted. We must proceed down the route of genetic modification with extreme caution, without denying that in some cases there could be great benefits to be had. ...read more.