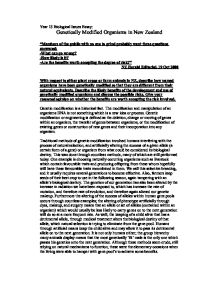 Year 13 Biological Issues Essay: Genetically Modified Organisms in New Zealand "Members of the public with no axe to grind probably want three questions answered: -What can go wrong? -How likely is it? -Are the benefits worth accepting the degree of risk?" NZ Herald Editorial, 19 Oct 2000 With respect to either plant crops or farm animals in NZ, describe how named organisms have been genetically modified so that they are different from their natural equivalents. Describe the likely benefits of the development and use of genetically modified organisms and discuss the possible risks. Give your reasoned opinion on whether the benefits are worth accepting the risk involved. Genetic modification is a historical fact. The modification and manipulation of an organisms DNA is not something which is a new idea or process. Genetic modification or engineering is defined as the deletion, change or moving of genes within an organism, the transfer of genes between organisms, or the modification of existing genes or construction of new genes and their incorporation into any organism. Traditional methods of genetic modification involved humans interfering with the process of natural selection, and artificially altering the success of a given allele (a certain form of a gene) ...read more.

Genetic tampering of organisms is natural, but is it in our best interests? Introducing a change into a biological system, either intentionally or accidentally, is likely to create effects on the whole system, many of which we will not be able to predict given the complexity of the system or control given the vastness of it. At the foundations of evolutionary life lies genetic variation. This variation is the fingerprints of our history and proof of our being. It is something which can't be artificially created, and if or when destroyed by cloning of a pest-resistant pine tree, or sheep which makes flawless wool, will be a loss which will not be taken into consideration by those who calculate net profits of the agricultural or forestry sectors. These are the real problems of genetic engineering. I can't talk about what any imaginary gods, or spirits may think of it. Now we must investigate the benefits of developing genetic technologies, and organisms. Genetic modification allows us to identify genes and understand their functions in research, also to study organisms, their characteristics and help to understand their diseases. We can investigate pests and diseases in animals and plants, and manipulate these to reduce the use of chemicals and pesticides in agriculture. ...read more.

Several separate experiments were done on the cattle one of which concerned inserting additional copies of the gene that produces casein, to increase the protein content of the milk. Another experiment involved disrupting the B-lactoglobulin gene to change the composition of the cow's milk. The protein produced by this gene causes lactose allergies from the milk in humans. The final experiment involved inserting a human gene that codes for a protein called myelin. This protein may provide a possible treatment for multiple sclerosis. All these experiments once again used somatic cell nuclear transfer. These two examples of genetic engineering on farm animals in New Zealand show that with the right precautions, genetically modified organisms can be a safe and successful way of producing a more beneficial situation. I can finally conclude that genetic engineering is a viable technology as long as barriers and safeguards are setup to separate genetically modified organisms from the natural forms of organisms and the rest of our biosphere and care is taken to minimise risks of DNA contamination. The benefits are very promising from the limited tools we have available now, and if we do not continue moving forward with the technology we run the risk of being left behind as techniques and knowledge relevant to genetic engineering become the intellectual property of others. The message is thus stated; proceed with caution. ...read more.