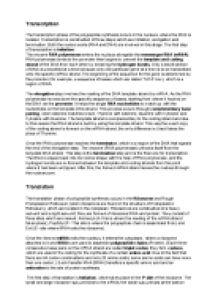 ﻿Transcription The transcription phase of the polypeptide synthesis occurs in the nucleus, where the DNA is located. Transcription is constructed of three steps which are Initiation, elongation and termination. Both the nucleic acids (RNA and DNA) are involved in this stage. The first step of transcription is Initiation: The enzyme RNA polymerase enters the nucleus alongside the messenger RNA (mRNA). RNA polymerase binds to the promoter then begins to unravel the template and coding strand of the DNA from each other by breaking the hydrogen bonds. Only a small section of DNA is unravelled at a time because only one particular gene at a time is to be transcribed onto the specific mRNA strand. The beginning of the sequence for the gene is determined by the promoter (for example, a sequence of bases which are called ?TATA? box), which is a region of DNA. The elongation step involves the reading of the DNA template strand by mRNA. As the RNA polymerase moves down the specific sequence of bases, starting from where it hooked on the DNA via the promoter. ...read more.

After this, the formed mRNA strand leaves the nucleus through the nuclear pore. Translation The translation phase of polypeptide synthesis occurs in the Ribosome and Rough Endoplasmic Reticulum (when ribosomes are found in the structure of Endoplasmic Reticulum), which are located in the cytoplasm. Ribosomes are constructed of a heavy sub-unit and a light sub-unit; they are formed of ribosomal RNA and protein. They consist of three sites which are named: Aminocyl (A- this is where the reading of the mRNA strand takes place), Peptidyl (P- This site is where the polypeptide chain is assembled from) and Exit (E- site where tRNA exits the ribosome). Once the formed mRNA exits the nucleus, it enters the cytoplasm, where a ribosome attaches to it and tRNA?s are used to assemble polypeptide chains (Protein). (Each three consecutive base pairs on the mRNA strand are called triplet codes; they form codons, which are used in the coding for the synthesis of a certain amino acid. ...read more.

Each time a new tRNA enters through the A-site and shifts into the P-site (once it attaches to the codons on the mRNA strand) as the one in the P-site exits the ribosome through the E-site. As this process carries on, the mRNA moves along the ribosomal sub-units. The termination step begins when a stop codon (UAA, UAG, UGA) goes in the A-site. This ends the translation process because there are no tRNA?s existing with an anticodon which is complementary to the stop codons. The polypeptide chain unhooks itself from the tRNA and tRNA exits the ribosome from the E-site. The large and small sub-units of the ribosome, part from the mRNA. mRNA self-destructs after this process, while tRNA carries on its function in another translation process. The formed protein chain is then transferred into the Golgi apparatus (in some cases these modifications can occur in the Endoplasmic Reticulum) for further modification before being secreted. Polysome formation is when more than one ribosome translates the same mRNA strand at the same time. ...read more.