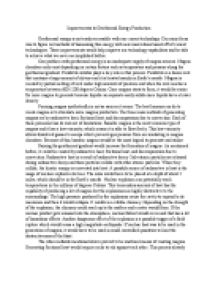 Geothermal energy is not easily accessible with our current technology. Our main focus was to figure out methods of harnessing this energy with new innovations based off of current technologies

Geothermal energy is not easily accessible with our current technology. Our main focus was to figure out methods of harnessing this energy with new innovations based off of current technologies. These improvements would help improve our technology capabilities and be able to achieve what we never accomplished before.

One problem with geothermal energy is an inadequate supply of magma sources. Magma chambers only exist depending on certain factors such as temperature and pressure along the geothermal gradient. Peridotite solidus plays a key role in this process. Peridotite is a dense rock that contains a large amount of olivine and it is located mainly in Earth’s mantle. Magma is created by partial melting of rock under high amounts of pressure and when the rock reaches a temperature between 600-1200 degrees Celsius. Once magma starts to form, it would be easier for more magma to generate because liquids can separate easily solids since liquids have a lower density.

Forming magma synthetically is not as easy as it seems. The best humans can do to create magma is to stimulate more magma production. The three main methods of generating magma are by radioactive heat, frictional heat, and decompression due to convection. Each of these processes has its own set of limitations. Basaltic magma is the most common type of magma and it has a low viscosity, which means it is able to flow freely.

The first step to utilizing all of these ways to lower water’s boiling point is to eliminate impractical methods. The only impractical method stated above would be using a vacuum; otherwise all of the other basic concepts have the potential to be implemented effectively. The next step would involve implementing a new pipe design. This would include a pressurized pipe that would effectively lower the boiling point substantially. This also implies that the water would be heated within the pipe. That means that the magma would heat the pressurized pipe which would allow for more predictability compared to dumping water on pure magma. This could also effectively increase the lifespan of geothermal power plants. This would make them a more appealing investment for power companies because it has the potential to substantially decrease the risk of too much water being poured down in one day, leading to the magma reserves being depleted. The pipe should be configured in a way to maximize the surface area of the water in contact with the heat source. This could be done by using a thin rectangular pipe with a 10:1 width to height ratio this keeps the idea realistic and simple enough to implement while still being highly effective. Another technology that could be used to lower the amount of energy required to boil water is the addition of a surfactant. What a surfactant does is “loosen” hydrogen bonds thus making them more easily broken.