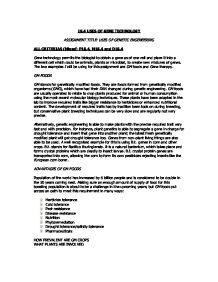 18.4 USES OF GENE TECHNOLOGY ASSIGNMENT TITLE: USES OF GENETIC ENGENEERING ALL CRITERIAS (Mixed) P18.4, M18.4 and D18.4 Gene technology permits the biologist to obtain a gene as of one cell and place it into a different cell which could be animals, plants or microbial, to create new mixtures of genes. The two examples I will be using for this assignment are GM foods and Gene therapy. GM FOODS GM stands for genetically modified foods. They are foods formed from genetically modified organisms (GMO), which have had their DNA changed during genetic engineering. GM foods are usually operated to relate to crop plants produced for animal or human consumption using the most recent molecular biology techniques. These plants have been adapted in the lab to improve required traits like bigger resistance to herbicides or enhanced nutritional content. The development of required traits has by tradition been took on during breeding, but conservative plant breeding techniques can be very slow and are regularly not very precise. Alternatively, genetic engineering is able to make plants with the precise required trait very fast and with precision. For instance, plant genetics is able to segregate a gene in charge for drought tolerance and insert that gene into another plant; the latest fresh genetically modified plant will get drought tolerance too. Genes from non-plant living things are also able to be used. A well recognised example for this is using B.t. genes in corn and other crops. B.t. stands for Bacillus thuringiensis. It is a natural bacterium, which takes place and forms crystal proteins which are deadly to insect larvae. B.t. crystal protein genes are transported into corn, allowing the corn to form its own pesticides rejecting insects like the European corn borer. ADVANTAGES OF GM FOODS Population of the world has increased by 6 billion people and is considered to be double in the 50 years coming next. ...read more.

has at the present become probable to try therapeutic genetic modification, in a few cases of human genes, where a defects exists which manifests itself in specific serious infections. This likelihood, called the gene therapy, is just in its infancy. Currently, no one recognizes how efficient it will show to be, even in the little conditions which is being tried - if it will just be of relatively limited application, or if it will open much broader potential. It puts up with both over-optimistic claims from some quarters and overstated hazard from others, over which the church requires to be discerning. It is not probable to state precisely where the potential opened up by today's technology will guide in terms of future developments have been occurring at a bewildering speed. Our knowledge of human nature not just identifies our God-given potential and capabilities, but also our failings and limits. Scientific query at its finest should bring an appropriate humility, which identifies both the wonder and also the contigence and smallness of the human condition in the created order. It distinguishes the restrictions to human understanding and knowledge. We are restrictions, and our understanding of the universe is partial, not perfect and conditioned by the social and cognitive structures we have used in making our scientific knowledge. The more controlling and difficult the technology, such as genetics engineering, the more essential this is. Genetics is yet a fairly young science, and its applications in gene therapy are at extra rudimentary step. This calls for prudence and the process of the 'precautionary principle', till we have sensible proof concerning probable side effects on the body overall. For instance, gene therapy looks to improve the major role of a defective gene, like stimulating a vital protein, by replacing or manipulating it. But either the mechanism, or the gene used to induce it in the body, could possess secondary effects which require be monitoring and assessing over a due period of time. ...read more.

They are best dealt with by counselling or psychotherapy. This certainly does not seem to be an adequate reason for developing germ line engineering technology. In think, germ line engineering would be a failure much greater than cloning. There should be an unconditional international restriction on germ line engineering, and funding agencies should not fund schemes, which aspire to increase such technology. Many reasons for this are broadly argued on. One which is clear is that, when it has been done to get rid of harmful genes, there will be no way to withstand pressures for use for improvement. A couple of years ago the UNESCO international Bioethics Committee addressed gene therapy, on a bioethical stage. They could not find any adequately convincing ethical arguments against somatic enhancement or 'medical' use of germ line engineering; yet the committee was unsuccessful to observe that when these two premises are accepted there can be no logical argument made in opposition to germ line enhancement engineering. A straightforward piece of information is that the major potential or germ line engineering to do things, which cannot be done better by other means, lies in enhancement. The actually fascinating thing is why many individuals keep quarrelling against ban. I think part of it is just dull old scientific careerism; a fraction of it is philosophical careerism and the wish to be courageously saying something varied to everyone else. However, there are three fundamental things that guide individuals to entertain the thought of germ line engineering, which are very satisfactorily spelled out in Professor Wivel's article, which he wrote with LeRoy Walters in Science a couples of years ago. I consider that we're heading for having a reassessment of a number of things we take for granted, if we wish to end full scale eugenics and germ line enhancement. The first is the medical imperative, second is the argument that Wival and Walters deployed which was to do with parental reproductive freedom and third underlying force driving development of germ line engineering is what Wival and Walters name the basic ethical of science. ...read more.