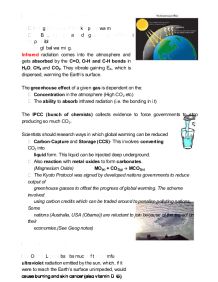 The 'Greenhouse effect' ? The greenhouse effect keeps us warm ? But, the enhanced greenhouse effect is responsible for global warming. Infrared radiation comes into the atmosphere and gets absorbed by the C=O, O-H and C-H bonds in H2O, CH4 and CO2. They vibrate gaining EK, which is dispersed, warming the Earth's surface. The greenhouse effect of a given gas is dependent on the: ? Concentration in the atmosphere (High CO2 etc) ? The ability to absorb infrared radiation (i.e. the bonding in it) The IPCC (bunch of chemists) collects evidence to force governments to stop producing so much CO2. Scientists should research ways in which global warming can be reduced ? Carbon-Capture and Storage (CCS)- This involves converting CO2 into liquid form. This liquid can be injected deep underground. ? Also reaction with metal oxides to form carbonates. (Magnesium Oxide) MO(s) + CO2(g) --> MCO3(s) ? The Kyoto Protocol was signed by developed nations governments to reduce output of greenhouse gasses to offset the progress of global warming. The scheme involved using carbon credits which can be traded around to penalise polluting nations. Some nations (Australia, USA (Obama)) ...read more.

Hence less protection for us. Oh no! Air pollution Air pollution offers a more direct threat to us, rather than long-term climate change. Infrared Spectroscopy is used to measure air pollution. A sample of air is drawn into the spectrometer. A beam of infrared radiation of a certain frequency is passed through the sample. Any CO present will absorb this CO. A control reading is taken with 'normal' air and compared. ? Burning hydrocarbons in fuels will produce carbon dioxide. If oxygen is not present, incomplete combustion will occur a and CO will be produced. (It is toxic and combines with the red blood cells in the body instead of oxygen) ? Some hydrocarbons don't get burnt and escape unchanged. They are toxic. ? Oxides of nitrogen are formed as the N = N bond from N2 in the air breaks in the hot engine. Oxides of nitrogen can cause smog and acid rain. Exactly like the aircraft example in the atmosphere; N2 + O2 --> 2NO - These oxides of nitrogen contribute to SMOG and ACID RAIN. ...read more.

Most of the time, the products are recycled in a new industry. - Addition reactions have a high atom economy and substitution reactions don't. Hence it is better to use addition reactions. - The number of steps should be kept down, as this often minimises production of waste materials and increases percentage yield. - Catalysts are pretty awesome. They improve the atom economy and (think enthalpy) make it so the yield is the same for a lower temperature which reduces cost to the manufacturer and reduces demand for energy which is from fossil fuels. ? Chemicals should be as non-toxic as possible. For example lead was used in paint but it had nasty effects on your health, so lead-free compounds are used instead ? Some foams in fire extinguishers leave hazardous products behind including CFC's (-->? Cl*). Alternatives are available. ? Dry cleaners use a solvent based on chlorinated hydrocarbons, but they are carcinogenic. Safer alternatives are now available. ? Ethanol and Methanol can be used for fuels. Already, they are mixed with normal petrol in the UK. They can be derived (Fermentation > Steam hydration) from plant matter/Vegetable oil which is renewable. It is cleaner than petrol. ...read more.

This report covers a lot of chemistry, including most of the key reactions that you will need to know for AS exams. The layout is somewhat confusing, however, with unnecessary pictures blocking some of the writing.
This piece of work is 3*