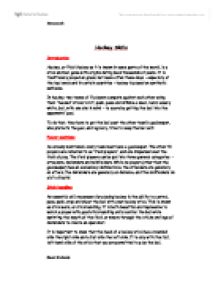 Hockey, or Field Hockey as it is known in some parts of the world, is a stick and ball game with origins dating back thousands of years. It is traditionally played on grass, but more often these days - especially at the top levels and in certain countries - hockey is played on synthetic surfaces.

In hockey, two teams of 11 players compete against each other using their 'hooked' sticks to hit, push, pass and dribble a small, hard, usually white, ball, with one aim in mind - to score by getting the ball into the opponents' goal.

To do that, they have to get the ball past the other team's goalkeeper, who protects the goal, and logically, tries to keep the ball out!

As already mentioned, every team must have a goalkeeper. The other 10 players are referred to as 'field players', and are dispersed over the field of play. The field players can be put into three general categories - attackers, defenders and midfielders. While no player (other than the goalkeeper)

Scoring a goal in hockey is very interesting. There are only certain ways it can be done: from a Field Goal, from a Penalty Corner, and from a Penalty Stroke.

A field goal is a goal scored from open, continuous play. Field goals may only be taken from the 'shooting circle', a roughly semi-circular area in front of the opponents' goal. If a ball is hit from outside the 'shooting circle' and goes into the goal, it does not count as a score.

To take a penalty corner, play is stopped to allow the teams to take their positions in attack and defence. One attacker stands with the ball on a designated spot on the back-line. (It's the line that marks the shorter boundary of the field of play and on which the goal is placed.)

Duration of a match

A regulation length hockey match lasts 70 minutes - which is broken into two halves of 35 minutes each. The team with the most goals at the end of the 70 minutes is the winner. It is also possible for a match to end in a draw. But in some matches - like in a tournament such as the World Cup or Olympics, or in a championship game - you must have a winner. In those cases, a match which is tied at the end of regulation time, then goes into extra time the first team to score in extra time wins, and if necessary, to a penalty stroke competition.