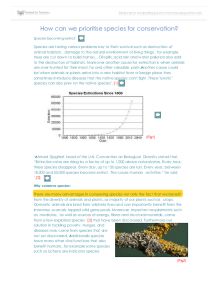 How can we prioritise species for conservation?

How can we prioritise species for conservation? Species becoming extinct: Species are facing various problems key to their survival such as destruction of animal habitats, damage to the natural environment of living things, for example trees are cut down to build homes, , Oil spills, acid rain and water pollution also add to the destruction of habitats. Moreover another cause for extinction is when animals are over-hunted for their meat, fur and other valuable parts.Another cause could be'when animals or plants arrive into a new habitat from a foreign place they sometimes introduce diseases that the native species can't fight. These "exotic" species can also prey on the native species'.[1] 'Ahmed Djoghlaf, head of the U.N. Convention on Biological Diversity stated that, "Extinction rates are rising by a factor of up to 1,000 above natural rates. Every hour, three species disappear. Every day, up to 150 species are lost. Every year, between 18,000 and 55,000 species become extinct. The cause: human activities." he said '.[2] Why conserve species: There are many advantages in conserving species not only the fact that we benefit from the diversity of animals and plants, as majority of our plants such as crops. Domestic animals are bred from wild relatives and can importantly benefit from the immense, scarcely tapped wild gene pools. ...read more.

In addition the activity of illegally keeping endangered species in captivity to attract visitors' this leads to less rare species as they are widely hunted down and kept for show. Moreover Industrialization, urbanization, and unsustainable agriculture practices leave negative impacts on the environment.Furthermorevarious forms of pollution such as more tour vehicles can impact the environment. Alternative:Funding can be attained from many conservation charities such as EDGE which can help fund conservation programmes Environmental Benefits: Edge is able to conserve species that are at most risk of being extinct and therefore reviving extinct species can help humans in terms of finding new cures to new diseases etc. Risk: By only conserving highly endangered species like the Archey's frog(Leiopelma archeyi) and not giving much attention on lower Edge scored species may cause lower edge scored species to become increasingly threatened as they are not given much devotion and consideration Alternative: Is to give equal attention to both lower Edge scored species as to higher Edge scored species so that conditions such as population size is noticed, not until they become highly endangered but when changes are seen from the beginning therefore conservation workers can act quickly and more effectively. Ethical Issues Does Edge have the right to decide which species should survive and which should die out? ...read more.

This report gives an overview of the reasons for conserving threatened species and how species can be selected for conservation. The structure is clear, but some sections are inadequately linked making it difficult to follow. Referencing is used well throughout so that sources are clearly identified. To improve:
1) Give more detailed biological background on the reasons for extinnctions in terms of habitat destruction, climate change and other human-induced reasons. Give further details on the potential uses of undoscovered species and the reasons for conserving all species in terms of ecosystenm unbalance.
2)Clearly indicate that EDGE is one technique for selecting species to conserve.
3)Give relevant A-level biological detail about the EDGE technique, explaining the importance of DNA and protein analysis.
4)Separate ethical/social/economic/environmental issues form benefits and risks.
5)Clarify that conserving key stone and indicator species are alternatives to using the EDGE system and explain how.
6)Sort out the formatting - a lot of the text is indecipherable for some reason, particularly in the bibliography.